Animal Learning and Cognition
An Introduction 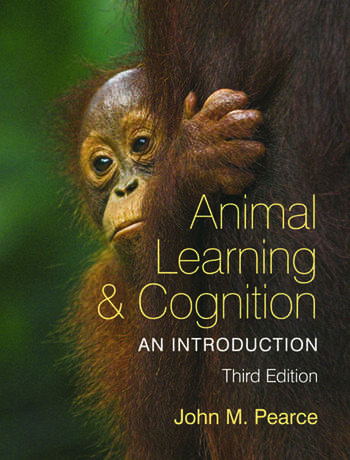 Animal Learning and Cognition: An Introduction

Animal Learning and Cognition: An Introduction provides an up-to-date review of the principal findings from more than a century of research into animal intelligence. This new edition has been expanded to take account of the many exciting developments that have occurred over the last ten years.

The book opens with a historical survey of the methods that have been used to study animal intelligence, and follows by summarizing the contribution made by learning processes to intelligent behavior. Topics include Pavlovian and instrumental conditioning, discrimination learning, and categorization. The remainder of the book focuses on animal cognition and covers such topics as memory, navigation, social learning, language and communication, and knowledge representation. Expanded areas include extinction (to which an entire chapter is now devoted), navigation in insects, episodic memory in birds, imitation in birds and primates, and the debate about whether primates are aware of mental states in themselves and others. Issues raised throughout the book are reviewed in a concluding chapter that examines how intelligence is distributed throughout the animal kingdom.

The broad spectrum of topics covered in this book ensures that it will be of interest to students of psychology, biology, zoology, and neuroscience. Since very little background knowledge is required, the book will be of equal value to anyone simply interested in either animal intelligence, or the animal origins of human intelligence.

"There are very few instances in which one of the world's leading researchers is willing to write a textbook in his area of expertise, and even fewer where the resulting text is beautifully clear and interesting. Pearce's text is of just this quality; any student fortunate enough to read it will be exposed to a lucid, entertaining, and stimulating introduction to what we know about animal learning and cognition." - Dr. David Lieberman, Department of Psychology, University of Stirling, UK

"This new edition of Pearce's text integrates a solid grounding in associative learning theory with an introduction to topics in animal cognition such as memory, spatial behavior, and social cognition. A particularly noteworthy feature is the way in which students are encouraged to think critically but open mindedly about the many intriguing new findings on animal tool using, imitation, theory of mind, and the like. As a basic text that covers the field of animal learning and cognition as it exists in the early 21st century, it has few, if any, competitors." - Professor Sara J. Shettleworth, Department of Psychology, University of Toronto, Canada

"The last decade has seen a major revolution in our understanding of animal intelligence, which is elegantly captured in John Pearce's new edition of Animal Cognition: An Introduction. Even better than the last two versions, this textbook provides a clear and comprehensive review of our current knowledge of animal learning and cognition, and in a style that is suitable for all undergraduate levels. I heartily recommend it." - Professor Nicky Clayton, Department of Experimental Psychology, University of Cambridge, UK

"Pearce has expanded and updated an excellent text that combines traditional learning theory with careful and critical coverage of the latest findings in comparative cognition, social learning, and communication. Students and professionals alike will be able to evaluate claims and plan experiments much more effectively after absorbing its wisdom." - Gordon M. Burghardt, University of Tennessee, USA