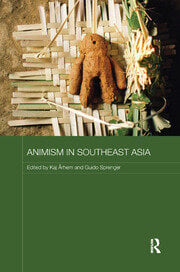 Animism refers to ontologies or worldviews which assign agency and personhood to human and non-human beings alike. Recent years have seen a revival of this concept in anthropology, where it is now discussed as an alternative to modern-Western naturalistic notions of human-environment relations.

Based on original fieldwork, this book presents a number of case studies of animism from insular and peninsular Southeast Asia and offers a comprehensive overview of the phenomenon – its diversity and underlying commonalities and its resilience in the face of powerful forces of change. Critically engaging with the current standard notion of animism, based on hunter-gatherer and horticulturalist societies in other regions, it examines the roles of life forces, souls and spirits in local cosmologies and indigenous religion. It proposes an expansion of the concept to societies featuring mixed farming, sacrifice and hierarchy and explores the question of how non-human agents are created through acts of attention and communication, touching upon the relationship between animist ontologies, world religion, and the state.

Shedding new light on Southeast Asian religious ethnographic research, the book is a significant contribution to anthropological theory and the revitalization of the concept of animism in the humanities and social sciences.

Kaj Århem is Emeritus Professor in Social Anthropology at the University of Gothenburg, Sweden. His previously published books include: Makuna: Portrait of an Amazonian People (1998); Ethnographic Puzzles (2000) and The Katu Village (2010).

is Professor at the Institute of Anthropology, Heidelberg University, Germany. He has previously published on ritual, exchange, human-environment relations, kinship and social morphology, cultural identity, and sexuality.

"These papers are a tremendous addition to comparative studies, Southeast Asian studies theory and methods, and ethnographic work. Defining and revitalizing animism, the editors bring together original fieldwork from 11 anthropologists. They define animism as the "ontologies or worldviews which assign agency and personhood to human and non-human beings alike." The German and Swedish editors keep the traditional theories in play while adding significantly to the body of methodological knowledge. The fieldwork is exceptional and wide-ranging; each essay serves as a springboard to further examination. This rare volume, both strong in content and groundbreaking in theory and methods, is a publication of the work on a panel organized at the sixth Conference of the European Association of Southeast Asian Studies in Gothenburg, Sweden, in August 2010. An exciting addition to the already powerful Routledge Contemporary Southeast Asia series. Summing Up: Essential." -- L. L. Lam-Easton, California State University, Northridge in CHOICE.

"... this book includes a number of ethnographically detailed and analytically well-articulated essays which should prove valuable to anyone interested in comparative cosmology and forms of symbolic or spiritual knowledge, not just in Southeast Asia but more generally." -- Gregory Forth, University of Alberta, Canada in Journal of the Royal Anthropological Institute

"[This] is a rich study that reaches well beyond the bounds of regional and disciplinary expertise. Surely, anthropologists of religion in Southeast Asia will have some commentary on the work, but so should scholars who work in the fields of global history, anthropology, sociology, religious studies, politics and society, and any number of subdisciplines. The rich comparative approach between Amerindian—in particular, Amazonian along with Ojibwe—animism and Southeast Asian animism broadens the possibilities of analysis for experts who work in East, South, and Central Asia, and the Middle East as well as African contexts." -- William B. Noseworthy, University of Wisconsin-Madison in Southeast Asian Studies

"Animism in Southeast Asia might prove to be a landmark for a new direction in Southeast Asian ethnographies of spirit beliefs (Animism)." -- Nathan Porath and Chayan Vaddhanaphuti, Chiang Mai University, Thailand in Bijdragen