Anna Maria van Schurman, 'The Star of Utrecht'
The Educational Vision and Reception of a Savante 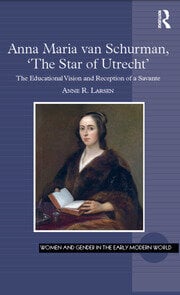 Anna Maria van Schurman, 'The Star of Utrecht': The Educational Vision and Reception of a Savante

Dutch Golden Age scholar Anna Maria van Schurman was widely regarded throughout the seventeenth century as the most learned woman of her age. She was 'The Star of Utrecht','The Dutch Minerva','The Tenth Muse', 'a miracle of her sex', 'the incomparable Virgin', and 'the oracle of Utrecht'. As the first woman ever to attend a university, she was also the first to advocate, boldly, that women should be admitted into universities. A brilliant linguist, she mastered some fifteen languages. She was the first Dutch woman to seek publication of her correspondence. Her letters in several languages Hebrew, Greek, Latin, and French – to the intellectual men and women of her time reveal the breadth of her interests in theology, philosophy, medicine, literature, numismatics, painting, sculpture, embroidery, and instrumental music. This study addresses Van Schurman's transformative contribution to the seventeenth-century debate on women's education. It analyses, first, her educational philosophy; and, second, the transnational reception of her writings on women's education, particularly in France. Anne Larsen explores how, in advocating advanced learning for women, Van Schurman challenged the educational establishment of her day to allow women to study all the arts and the sciences. Her letters offer fascinating insights into the challenges that scholarly women faced in the early modern period when they sought to define themselves as intellectuals, writers, and thoughtful contributors to the social good.

Anne R. Larsen is the Lavern '39 and Betty DePree '41 Van Kley Professor of French at Hope College, USA. She has edited (and co-edited) books on Renaissance and seventeenth-century women writers, including Early Modern Women and Transnational Communities of Letters (2009).

"This is an important monograph for anyone who studies the education of early modern women. Van Schurman is not as well known as other women writers from this period, thus this work allows us a penetrating look into her life, education, devotions, and friendships, all of which shaped her work. This is a deeply affecting and meticulously researched book." - Erica Bastress-Dukehart, Skidmore College, USA

"Larsen’s study of the Star of Utrecht is carefully researched and well organized. The author has thoroughly mined Van Schurman’s extensive correspondence and provides a deep and meticulous analysis of her vision of education for women. In doing so, she has highlighted one of the lesser-known aspects of Van Schurman’s thought. Scholars of early modern ideas and letters will find this to be a very illuminating book indeed." - Christine Kooi, Louisiana State University, USA