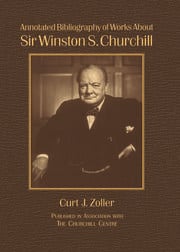 This unique resource will be an enormous aid and impetus to Churchill studies. It lists over 600 works, with annotations, and includes sections listing an additional 5,900 entries covering book reviews, significant articles, and chapters from books. Separate author and title indexes will allow the user to locate specific entries. The book's aim is to direct students, researchers, and bibliophiles to the entire corpus of works about Churchill.

This concise history of the news broadcasting industry will appeal to both students and general readers. Stretching from the "radio days" of the 1920s and 1930s and the early era of television after World War II through to the present, the book shows how commercial interests, regulatory matters, and financial considerations have long shaped the broadcasting business. The network dominance of the 1950s ushered in the new prominence of the "anchorman, " a distinctly American development, and gave birth to the "golden age" of TV broadcasting, which featured hard-hitting news and documentaries, epitomized by the reports by CBS's Edward R. Murrow. Financial pressures and advertising concerns in the 1960s led the networks to veer away from their commitment to serve the public interest, and "tabloid" television -- celebrity, gossip-driven "soft news"-- and news "magazines" became increasingly widespread. In the 1980s, cable news further transformed broadcasting, igniting intense competition for viewers in the media marketplace. Focusing on both national and local news, this stimulating volume examines the evolution of broadcast journalism. It also considers how new electronic technologies will affect news delivery in the 21st century and whether television news can still serve both the public interest and maintain an audience.