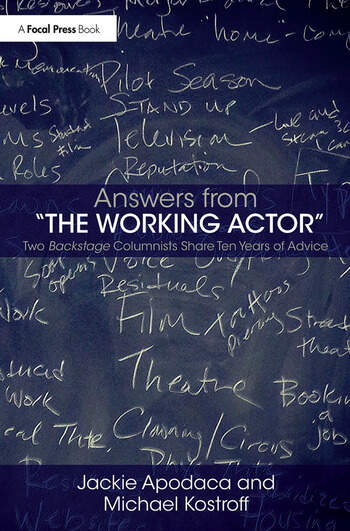 For nearly a decade, Jackie Apodaca and Michael Kostroff shared duties as advice columnists for the actorsŌĆÖ trade paper, Backstage. Their highly popular weekly feature, "The Working Actor," fielded questions from actors all over the country. A cross between "Dear Abby" and The Hollywood Reporter, their column was a fact-based, humorous, compassionate take on the questions actors most wanted answered. Using some of their most interesting, entertaining, and informative columns as launch points, Answers from "The Working Actor" guides readers through the ins and outs (and ups and downs) of the acting industry.

Apodaca and Kostroff share an approach that is decidedly "on the ground." TheyŌĆÖve both labored in the trenches just like their readersŌĆödealing with auditions, classes, photos, r├®sum├®s, rehearsals, contract negotiations, representatives, jobs, challenging colleagues, and the search for that elusive life/career balance. There are few absolutes in the acting profession and virtually no proven and reliable steps. Unlike books that claim to offer "Quick Steps to a Successful Acting Career," Answers from "The Working Actor" deals honestly with the realities, providing facts, options, strategies, stories, points of view, and the wisdom of experience, while ultimately challenging readers to make their own decisions. This book will give new actors a head start on their journeys and remind experienced professionals that, in the acting business, there is never only one answer to any question.

Auditions and the Casting Process

The Nature of the Career

Jackie Apodaca is a professor of theatre at Southern Oregon University. She has worked as an actor, director, and producer in theatre, film, and media, with companies such as the Roundabout, Denver Center, National Geographic, filmscience, Modern Media (head of production), Venice Theatre Works (associate artistic director), Shakespeare Santa Barbara (producing director), and Ashland New Plays Festival (associate artistic director). She spent more than a decade at Backstage, where she was a contributing editor and wrote the advice column "The Working Actor." Jackie earned an MFA from the National Theatre Conservatory, under the guidance of RSC founding member, Tony Church.

is an established actor best known for his five seasons on HBOŌĆÖs The Wire and a long list of other television roles. HeŌĆÖs toured nationally in The Producers and Les Mis├®rables, an experience which he chronicled in his book, Letters from Backstage (Allworth Press, 2005). From 2006 to 2012, he shared writing duties with Jackie Apodaca on BackstageŌĆÖs advice column, "The Working Actor." A teacher as well as an actor and writer, heŌĆÖs presented his popular Audition Psych 101 workshop all over the country, and recently authored a book by the same name (Dog Ear Publishing, 2017).