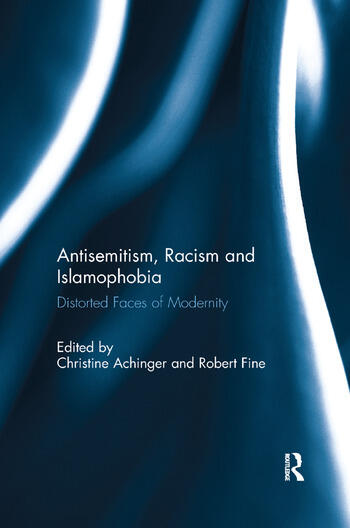 The growing threat of antisemitism, racism and Islamophobia within the European political landscape poses urgent and difficult questions. These questions concern both commonalities and connections between these forms of prejudice and persecution, and differences regarding their discursive functions and the image of the ‘other’ they project. In this volume we interrogate the specific forms which antiracism and anti-antisemitism take in the public sphere, their representation in scholarly discourses, and the fact that they increasingly seem to be at home in separate, and sometimes antagonistic, political and academic camps. We also address the conceptual resources and research tools required to study the unity that lies behind these varied phenomena.

This collection has a new introduction and brings together papers that arose out of discussions in the European Sociological Association Network on Racism and Antisemitism, published in European Societies. The chapters relate to current issues in the area of racism and anti-Semitism such as the notable impact of the Israel-Palestine conflict on antisemitism in Europe, the contested ‘antizionist’ humour of Dieudonné in France, relations between antisemitic and Islamophobic attitudes in Italy and Spain, the problem of antisemitic reactions to Islamophobia in Arab media, the historical relation of antisemitism to other kinds of racism in German literary discourse and how their study can be instructive for the investigation of antisemitism and Islamophobia today, the difficulties Marxists internationally have faced in addressing concerns about antisemitism, and current disconnections between racism and antisemitism in the human sciences. These papers raise fundamental issues of understanding the modern world.

This book was originally published as a special issue of European Studies.

1. ‘Introduction: On the difficulties of understanding antisemitism and its connections with other racisms’ Robert Fine and Christine Achinger

2. A common cause: Reconnecting the study of racism and anti-Semitism Glynis Cousin and Robert Fine

3. Antisemitism in France: Past and present’ Veronique Altglas

4. Threats to modernity, threats of modernity: Racism and antisemitism through the lens of literature Christine Achinger

5. The blind spots of secularization: A qualitative approach to the study of antisemitism in Spain Alejandro Baer and Paula López

6. The racialization of public discourse: Antisemitism and Islamophobia in Italian society Dario Padovan and Alfredo Alietti

7. Discourses on antisemitism and Islamophobia in Arab media Esther Webman

8. European Marxism and the question of antisemitism: Reactions to the Holocaust before, during and after the event Philip Spencer

Christine Achinger is Associate Professor of German Studies at the University of Warwick. She has published in the area of critical social theory and German Studies. She is currently working on constructions of Jewishness, gender and modernity and their interrelation since the Enlightenment.

is Emeritus Professor of Sociology at the University of Warwick, UK. He has published widely in the area of critical social theory focusing on rights, law, state and cosmopolitanism. He is currently co-editing a collection on Hannah Arendt’s On Revolution and co-authoring a monograph on antisemitism and cosmopolitanism. He is on the Executive of the European Sociological Association.