Antisemitism and Anti-Zionism in Turkey
From Ottoman Rule to AKP 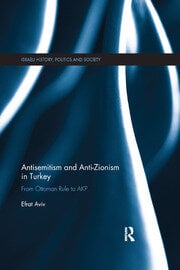 Antisemitism and Anti-Zionism in Turkey: From Ottoman Rule to AKP

The Jewish community in Turkey today is very diverse with extremely different views as to whether Jews are reluctant or enthusiastic about living in Turkey. Many see themselves primarily as Turks and only then as Jews, while some believe quite the opposite. Some deny there are any expressions of antisemitism in Turkey while others would call it xenophobia and would claim that the other non-Muslim communities in Turkey share the same antagonism.

‘Antisemitism and Anti-Zionism in Turkey’ provides a comprehensive history of the extent of antisemitism in Turkey, from the time of the Ottomans, through the establishing of the Turkish Republic, and up to recent times and the AK Party. It also provides an in-depth analysis of the effect of Israeli military operations on antisemitism, from the Second Lebanon War in 2006 to Operation Protective Edge in 2014. Much emphasis is given to the last decade, as scholars and local Jews assert that antisemitism has increased during this period. An illustrated overview of antisemitism in Turkish media, covering newspapers, books, entertainment, and education, is provided. The book also analyses Turkish society’s attitude towards Jews in contrast with other minorities, and examines how the other minorities see the Jews according to their experience with Turkish society and government.

A unique poll, data collected from personal interviews and the use of both Turkish and Israeli research resources, all help to provide a fresh insight into antisemitism in Turkey. This book will therefore be a key resource for students and scholars of antisemitism and anti-zionism studies, Turkish Studies and Middle East Studies.

Introduction Part A: From Ottoman Rule to Modern Times 1 Jews Between Ottoman Rule and the Turkish Republic 2 From the 1920s to the 1990s Part B: Anti-Semitism Under AKP Rule 1 The Rise of the AK party 2 Israel Military Operations and Their Impact on Antisemitism 3 Antisemitism in the Turkish Media Conclusion

Efrat Aviv is a lecturer in the Department of Middle Eastern Studies at Bar Ilan University, Israel. She was a fellow at the Vidal Sassoon International Center for the Study of Antisemitism between 2012-2015, and a research fellow at Begin-Sadat Center for Strategic Studies, Israel.

"This book, the product of extensive research (i.e., especially in Turkish-, Hebrew-, and English-language literature as well as insightful interviews) includes very interesting and informative quotations as well as photographs and charts. The book is not only an important contribution to the study of Turkish and Jewish history but also an easy read."

"The author has done an excellent job tracing anti-Semitism in Turkey. Let’s be blunt and straightforward: It exists. It exists in the most classic terms, even though some Jews make gigantic efforts to deny it. The author’s approach is very much a positive first step—read the cards for what they are and recognize reality. Anti-Semitism is alive and thriving in current-day Turkey, from the general population to figures in the higher echelons of government...Not every Turk is an anti-Semite. Synagogues are being protected. Historic Jewish sites are being restored, such as the synagogue in Edirne. But, the atmosphere is problematic. If adults can dodge hatred and hide from danger, one can only ask if this is an atmosphere in which children should be raised. Aviv paints a very descriptive picture."

"Efrat Aviv of Bar-Ilan University has written a comprehensive history of antisemitism in both the Ottoman Empire and modern Turkey, meticulously demonstrating manifestations of antisemitism throughout Turkish history. Her new book is a welcome addition to the literature on antisemitism and anti-Zionism in Turkey and is objectively written with anin-depth historical analysis of the two phenomena."