Apostolic Iconography and Florentine Confraternities in the Age of Reform 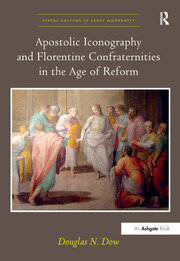 Apostolic Iconography and Florentine Confraternities in the Age of Reform

Focusing on artists and architectural complexes which until now have eluded scholarly attention in English-language publications, Apostolic Iconography and Florentine Confraternities in the Age of Reform examines through their art programs three different confraternal organizations in Florence at a crucial moment in their histories. Each of the organizations that forms the basis for this study oversaw renovations that included decorative programs centered on the apostles. At the complex of GesÃ¹ Pellegrino a fresco cycle represents the apostles in their roles as Christ’s disciples and proselytizers. At the oratory of the company of Santissima Annunziata a series of frescoes shows their martyrdoms, the terrible price the apostles paid for their mission and their faith. At the oratory of San Giovanni Battista detta dello Scalzo a sculptural program of the apostles stood as an example to each confratello of how Christian piety had its roots in collective effort. Douglas Dow shows that the emphasis on the apostles within these corporate groups demonstrates how the organizations adapted existing iconography to their own purposes. He argues that their willful engagement with apostolic themes reveals the complex interaction between these organizations and the church’s program of reform.

'This impressive volume by Dow ... helps fill a scholarly void in books on religious painting in the last quarter of the 16th century in Florence. ... The text is meticulous and scholarly, supported by copious notes, bibliography, and original illustrations appropriate to such an ambitious and groundbreaking study. ... Highly recommended. Upper-division undergraduates through researchers/faculty.’ Choice

'Dow's book uses a rich quantity of illustrations to make his point, both plans and reproductions of the frescoes and some of the statues ... Dow brings to light much detail regarding the confraternities' organisation and motivation in commissioning new works of art both as embellishment of the oratories and as education material for the confratelli.' Sehepunkte

'More than just a window onto a neglected field, it is a thorough, meticulous study based on archival research and stylistic analysis, in one case including a methodical reconstruction of a long-lost interior. It represents the kind of scholarship that has too often fallen by the wayside in an era when detail (and often accuracy) are neglected in favour of the big, interdisciplinary picture. Contributions such as Dow's are especially needed in places like post-Tridentine Florence, where the literature simply has not yet done the groundwork: we will not be able to see the big picture until we get our facts straight.' Burlington Magazine

'... Dow focuses new attention on Florentine confraternal identification with the apostles at a time when the Church was asserting its own claims as a purified paleo- Christian institution. This exemplifies yet another dynamic way in which sodalities responded to and shaped the prevailing religious culture.' Renaissance Quarterly

'This important, lucid, and elegantly written book is in part a product of the spatial and sensory turn that has driven much recent research. It will be of interest not only to art historians but also to scholars in other disciplines who are concerned with the process by which traditional forms of devotion, and the desired ends of Church reformers, converged and mingled with the city’s artisan culture and patronage relations. In a wider sense, Dow’s evocation of the resulting mélange, and his explication of how urban culture took visual and spatial form, teaches us more about how citizens, including non-elites, inhabited and negotiated the early modern European city.' CAA Reviews