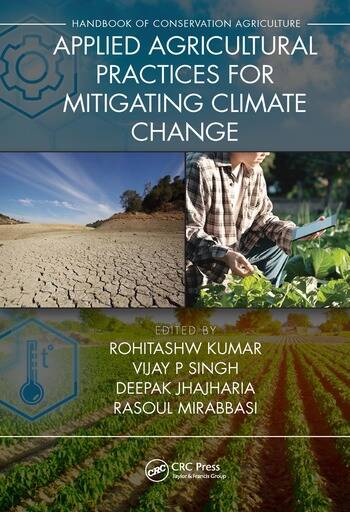 Conservation agriculture is a sustainable production model that not only optimizes crop yields, but also reaps economic and environmental benefits as well. The adoption of successful conservation agriculture methods has resulted in energy savings, higher organic matter content and biotic activity in soil, increased crop-water availability and thus resilience to drought, improved recharge of aquifers, less erosion, and reduced impacts from the weather associated with climate change in general.

examines several important aspects of crop production, such as the use of microorganisms and biofertilizers as well as GIS and Remote Sensing applications. It presents the latest techniques in crop modeling, best practices for irrigation under water deficit conditions, and other approaches for sustainable conservation agriculture that consider the environmental effects of climate change.

Dr. Rohitashw Kumar (B.E., M.E., Ph. D.) is Professor in College of Agricultural Engineering and Technology, She-e- Kashmir University of Agricultural Sciences and Technology of Kashmir, Srinagar, India. He is also Professor Water Chair (Sheikkul Alam Shiekh Nuruddin Water Chair), Ministry of Water Resources, Govt. of India, at National Institute of Technology, Srinagar (J&K). He obtained his Ph.D. degree in the Water Resources Engineering from NIT, Hamirpur and Master of Engineering Degree in Irrigation Water Management Engineering from MPUAT, Udaipur. He got Special Research award in 2017 and Student Incentive Award-2015 (Ph.D. Research) from Soil Conservation Society of India, New Delhi. He has also got the first prize in India for best M. Tech thesis in Agricultural Engineering in year 2001. He graduated from Maharana Pratap University of Agricultural and Technology, Udaipur, India, in Agricultural Engineering. He has published over 80 papers in peer-reviewed journals, 4 practical manuals and 20 chapters in books. He has guided 10 post-graduate students in soil and water engineering. He has handled more than 10 research projects as a principal or co-principal investigator. Since 2011, he has been Principal Investigator of All India Coordinated Research Project on Plasticulture Engineering and Technology.

is a Distinguished Professor, a Regents Professor, and the inaugural holder the Caroline and William N. Lehrer Distinguished Chair in Water Engineering at Texas A&M University. His research interests include Surface-water Hydrology, Groundwater Hydrology, Hydraulics, Irrigation Engineering, Environmental Quality, Water Resources, entropy theory, copula theory, and mathematical modeling.  He graduated with a B.Sc in Engineering and Technology with emphasis on Soil and Water Conservation Engineering in 1967 from U.P. Agricultural University, India. He earned an MS in Engineering with specialization in Hydrology in 1970 from the University of Guelph, Canada, a Ph.D. in Civil Engineering with specialization in Hydrology and Water Resources in 1974from Colorado State University, Fort Collins, USA, and a D.Sc. in Environmental and Water Resources Engineering in 1998 from the University of the Witwatersrand, Johannesburg, South Africa. He has published extensively on a wide range of topics. His publications include more than 1200 journal articles, 30 books, 70 edited books, 305 book chapters, and 315 conference proceedings papers. For seminar contributions he has received more than 90 national and international awards, including three honorary doctorates. Currently he serves as President-Elect of American Academy of Water Resources Engineers, American Society of Civil Engineers and previously he served as President of American Institute of Hydrology. He is Editor-in-Chief of two book series, one journal and serves on the editorial boards of more than 20 journals. He has served as Editor-in-Chief of three other journals. He is a Distinguished Member of American Society of Civil Engineers, an Honorary Member of American Water Resources Association, and a fellow of fiver professional societies. He is also a fellow or member of 11 national or international engineering or science academies. 3.

(B. Tech., M. Tech. and Ph. D.) is currently working as Associate Professor in Department of Soil & Water Conservation Engineering, College of Agricultural Engineering & Post Harvest Technology, Ranipool, Gangtok, Sikkim, India. He is also acting as principal investigator of All India Coordinated Research Project on Plasticulture Engineering Technology CAEPHT (Gangtok) centre, which is funded entirely by ICAR Central Institute of Post Harvest Engineering and Technology, Ludhiana, India, since 2016. He graduated from College of Technology and Engineering (MPUAT), Udaipur, Rajasthan, India, in Agricultural Engineering in 1998, and did post-graduation from Indian Institute of Technology Delhi, India, in Water Resources Engineering, Department of Civil Engineering. He obtained his Ph. D. degree from Department of Hydrology, Indian Institute of Technology Roorkee, Uttarakhand, India. He was awarded Young Talent Attraction – BJT of Science without Borders Program for International Scientists, National Council for Scientific and Technological Development (CNPq), Brazil, as Research Collaborator at Universidade Federal Rural de Pernambuco (UFRPE), Recife, PE, Brazil, in 2013. He has published over 50 papers in peer-reviewed journals, 3 extension bulletins, and 7 chapters in books. He has guided 8 M. Tech. theses in the field of Soil and Water Conservation Engineering along with many undergraduate theses in the field of Agricultural Engineering. He has handled 9 research projects sponsored by governmental agencies as principal or co-principal investigator. He also conducted one 21-day Summer School for scientists from ICAR and faculty members from different universities and one 90-day skill development training programme on Greenhouse Technology for school drop-outs and unemployed rural youth from six states of northeast India. He was awarded the CSIRO Land and Water Publication Award 2013, CSIRO Australia for global review paper published in Journal of Hydrology. He is a Fellow of Indian Association of Hydrologists, Roorkee (in 2015) and Society of Extension Education, Agra (in 2018). He is a recipient of Distinguished Alumni Award (in 2016) from College of Technology and Engineering Alumni Society, CTAE (MPUAT), Udaipur. He was also adjudged the best extension scientist (2017-18) of the AICRP on PET in recognition of outstanding contribution for extension and popularization of Plasticulture Technologies in Sikkim. He is also a life member of 14 different professional societies from India and abroad.

is an Associate Professor of Hydrology and Water Resources Engineering

at Shahrekord University, Iran. His research focuses mainly on Statistical and Environmental Hydrology and Climate Change. In particular, he is working on Modeling Natural Hazards, including floods, droughts, winds, and pollution, toward a sustainable environment. Formerly, he was a Visiting Researcher at University of Connecticut, United States. He has contributed to more than 150 publications in journals, books, or as technical reports. He is reviewer of about 20 Web of Science (ISI) journals. He is currently Head of Water Resources Center of Shahrekord University.