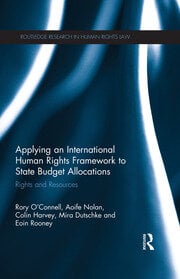 The book sets out an ICESCR-based methodology for analysing budget and resource allocations and focuses on the legal obligation imposed on state parties by article 2(1) of ICESCR to progressively realise economic and social rights to 'the maximum of available resources'. Taking Northern Ireland as a key case study, the book demonstrates and promotes the use of a ‘rights-based’ approach in budgetary decision-making.

The book will be relevant to a global audience currently considering how to engage in the budget process from a human rights perspective. It will be of interest to students and researchers of international human rights law and public law, as well as economic and social rights advocacy and lobbying groups.

Rory O'Connell is Professor in Human Rights and Constitutional Law at the Transitional Justice Institute/School of Law, University of Ulster. His research and teaching interests are in the areas of human rights, equality and constitutional law.

Aoife Nolan is Professor of International Human Rights Law at the School of Law, University of Nottingham, She has published extensively in the areas of human rights, particularly in relation to economic and social rights and children's rights.

Colin Harvey is Professor of Human Rights Law, School of Law, Queen's University Belfast. He has written widely on human rights and constitutional law. He served as a Commissioner on the Northern Ireland Human Rights Commission (2005-2011) and is a former Head of the School of Law at Queen's (2007-2012).

Mira Dutschke has a postgraduate degreee in Human Rights law and 10 years research experience in Southern Africa, Northern Ireland the the United States. She teaches at the University of Cape Town and works as an environmental news and film producer, and researcher.

Eoin Rooney is a social researcher. He is currently Coordinator of the Centre for Economic Empowerment, a think tank and skills development project within the Northern Ireland Council for Voluntary Action (NCVA).