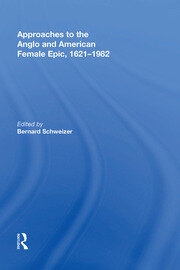 Epic has long been regarded as the exclusive domain of the male literary genius and as an incarnation of patriarchal values. This provocative collection of essays challenges such a hegemonic stereotype by demonstrating the ways in which women writers have successfully adapted the masculine epic tradition to suit their own aesthetic needs and to express their own heroic literary, social, and historical visions. Bringing the female epic out of the shadows, the contributors rethink generic boundaries to illuminate this heretofore hidden literary practice. The essays range from Mary Tighe to Rebecca West from Elizabeth Barrett Browning to Gwendolyn Brooks, and from Frances Burney to Virginia Woolf. Bernard Schweizer's introduction, titled 'Muses with Pens,' connects the trajectory of ideas and influences in the individual essays to demonstrate how each participates in reclaiming for women writers a place in the development of a female epic tradition. The volume will be an invaluable resource for scholars working on issues related to genre, canon formation, and the evolution of female literary authority.