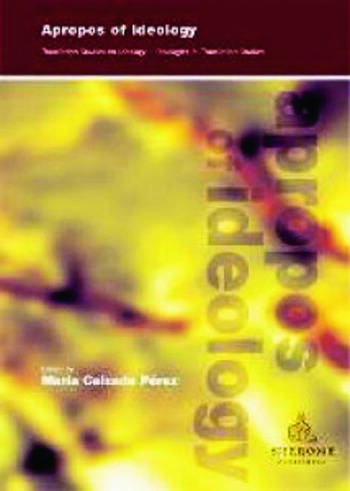 Today's worldwide ideological tensions have captured the interest of such varied disciplines as political science, anthropology, sociology, cultural studies and linguistics. There are two primary reasons why translation studies cannot ignore the ideological debate. Historically, translation has always been a site for ideological clashes. In addition, globalization is now setting off translational mechanisms even within monolingual artifacts, and this calls for the expertise of translation scholars.

Apropos of Ideology aims to contribute to the broader discussion of ideology by providing a forum for debating ideological issues in translation as well as by bringing together, within the pages of a single volume, different types of translation research, informed by very different research ideologies. Adopting a wide definition of ideology as a set of ideas, beliefs and codes of behaviour that "govern a community by virtue of being regarded as the norm", a number of translation scholars look into ideological phenomena as they impinge on the process of translation. They consider questions of politics, but also reflect upon gender, sexuality, religion, secularity, technology and even the very discipline of translation studies. At the same time, the volume displays the kaleidoscopic complexity of the discipline while providing a strong argument that such diversity of perspectives is highly desirable.

This chapter illustrates extratextual and intratextual aspects of ideology as related to translation with a case study, a policy document by Tony Blair and Gerhard Schröder, jointly published in English and German in June 1999. Textual features of the two language versions are compared and linked to the social contexts. Concepts and methods of critical discourse analysis and of descriptive and functionalist approaches to translation are applied for this purpose. In particular, reactions to the German text in Germany are explained with reference to the socio-political and ideological conditions of the text production, which was a case of parallel text production combined with translation. It is illustrated that decisions at the linguistic micro-level have had effects for a political party, reflected for example in the German Social Democratic Party debating its identity due to the textual treatment of ideological keywords. The subtle differences revealed in a comparative analysis of the two texts indicate the text producers' awareness of ideological phenomena in the respective cultures. Both texts thus serve as windows onto ideologies and political power relations in the contemporary world.

"Events" and "Horizons": Reading Ideology in the "Bindings" of Translations, Keith Harvey, pp 43-69

After theorizing the usefulness of the notions 'event', 'discourse' and 'horizon of expectation' for understanding the ideological strains present in translated literary texts, this paper analyses the bindings of three gay fictional texts translated from American English into French in the late 1970s. The bindings, which are constituted by the titles, cover photos and back cover blurbs of the translations, are shown to be key sites for the figuring of translated texts as interfaces between competing ideological positions. In particular, a fraught understanding and evaluation of American notions of 'gay' are revealed to structure and permeate the material of the bindings. The discussion concludes with the implications of such an analysis for conceptualizing the complexity of the agency evidenced by translations.

The idea that discourse is never neutral and that language is always charged with ideological connotations provides the starting-point for this paper which reflects on the work of artists who use language in their works of art; for these artists, language is art, an art which in some cases attacks different social injustices related to consumerism, race or gender. This discourse is extremely difficult to translate, because it is pure ideology and because the translator has to translate a work of art. It presents the translator with a real challenge.

Based on the author's personal experience of participating in a new German translation of the New Testament, the paper analyzes the influence of ideology or ideologies (in a wide sense of the word) both from the translatological and the theological point of view, illustrating it by means of several examples from the new translation in comparison with other renderings into English, French, Spanish, Italian, or Brazilian Portuguese. From the perspective of translation theory, ideological aspects refer to the definition of the skopos ("Otherness Understood"), the selection of translation strategies and their justification for readers who have specific expectations based on their experience with previous translations of the New Testament or other Biblical texts. From the theological standpoint, ideology is at stake in the unfamiliar chronological order in which the texts appear in the book and in the addition of texts from the first two centuries which were not included in the canon of the Church. Ideology also determines the interpretation of passages that are, or seem to be, ambiguous in the original or verses which have been translated in different manners by Catholic or Protestant translators. Last, but not least, feminist ideology has been taken account of in the use of inclusive language (e.g., speaking of fathers and mothers or brothers and sisters instead of fathers or brothers only).

This paper discusses the ways in which translation was used as an instrument of modernization in Turkey by exploring the ideological backdrop of the state-sponsored Translation Bureau. The Bureau, which was operational in 1940-1966, produced over a thousand translations of mainly western classics and proved to be the most influential translation institution founded in republican Turkey. The paper carries out a critical analysis of the discourse formed around this institution and looks at how it recently achieved a symbol status for certain sections of the society mainly due to its ideological grounds. The paper argues that the Translation Bureau was established in order to create a common cultural basis and a new literary repertoire for the newly forming Turkish nation. This function, which only remained partially fulfilled, was modified as the political context changed through the later decades of the Republic. It was also this initial function that eventually granted a symbol status to the Bureau whereby its products came to be identified with the modernization and westernization project of early republican Turkey.

Consumer capitalism and popular television are the two main ideologies moulding an interpreter's performance on television. These two apparently invisible forces form the base layer of an iceberg model, and are creating significant changes in the interpreter's traditional habitus. Gatekeeping opportunities and constraints are provided at every level of the submerged part of the iceberg. The more visible layers of the iceberg illustrate how the interpreter's strategies and performance are regulated and evaluated by norms which result from these ideologies, and are significantly at variance with the traditional prescriptive conference interpreting norms based on the traditional interpreter's identity and status. One overriding norm we call "the comfort factor": the degree to which the TV audience is entertained. Examples are given of how broadcasters and hosts may - logically, according to this model - control the translation process before, during and after the interpreted event. Finally, from examples taken from our corpus, we sketch what we see as an emerging prototype of the media interpreter, one who is able to manage the interpretation in the new habitus. The media interpreter is, thus, a highly professional and visible performer, able to embody the values of the two main ideologies, and match the expectations of both broadcasters and viewers.

The Manipulation of Language and Culture in Film Translation, Peter Fawcett, pp 145-163

Because film translation operates under a number of technical constraints, it is often assumed that the final target text is largely conditioned by those constraints and nothing else: x was left out because there was no space in the subtitles; x was substituted by another form of wording because of the need for lip sync. It is possible to argue, however, that the apparently objective, material constraints are in fact conventions or, in the terminology of descriptive translation studies, norms, which raises the question: how much of the target text is itself manipulated, consciously or not, by norms rather than constraints? Can we detect normalizing, repressing, levelling and censoring strategies in operation where there is no need for them other than the need for ideological, moral, and social control? This paper examines a small corpus of mainly subtitled French films and discovers that although, indeed, such strategies are dominant, film translation, like other modes of translation, is also subject to human randomness and simple cussedness, thereby countering the claims of those scholars who believe that they have found, in the concept of the invisible translator, the key to Western translation practice.

The Power of Originals and the Scandal of Translation - A Reading of Edgar Allan Poe's "The Oval Portrait", Rosemary Arrojo, pp 165-180

Most of the dominant discourse on translation usually revolves around the desire to neutralize difference and to achieve perfect repetition. In Edgar Alan Poe's "The Oval Portrait", I intend to examine the main implications of the ethical code that inspires essentialist expectations towards the translator's task. In this exemplary plot, which brings a peculiar twist to the traditional association between translation (as portraiture) and the death of the original, Poe's protagonist miraculously produces a perfect repetition of his model and beloved bride and, thus, seems to achieve the ultimate goal of total fidelity to the original. At the same time, however, he is also punished with (and indirectly blamed for) the death of his beloved as her life and beauty are literally transferred to the portrait. To the extent that it punishes the painter/translator for his authorial dedication to the portrait, Poe's plot seems to reflect the same distrust that essentialism generally associates with translation. Also, to the extent that it also shows that the portrait/translation, in spite of its apparently radical fidelity to the model, inevitably acquires an independent life and becomes more real than the (dead) original, Poe's tale offers us an emblematic illustration of the complex relationship that is usually established between originals and translations, and how most of us still react to it.

Ideology and the Position of the Translator - In What Sense is a Translator 'In Between'? Maria Tymoczko, pp 181-201