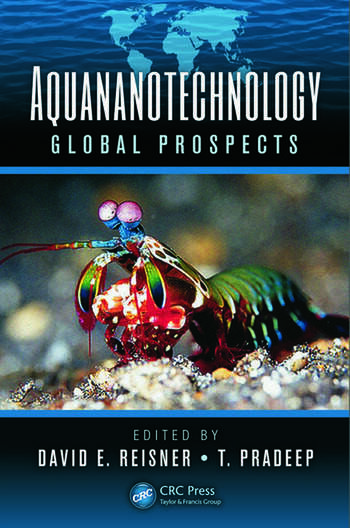 The world’s fresh water supplies are dwindling rapidly—even wastewater is now considered an asset. By 2025, most of the world's population will be facing serious water stresses and shortages. Aquananotechnology: Global Prospects breaks new ground with its informative and innovative introduction of the application of nanotechnology to the remediation of contaminated water for drinking and industrial use. It provides a comprehensive overview, from a global perspective, of the latest research and developments in the use of nanotechnology for water purification and desalination methods.

With contributions from experts in developed and developing countries, including those with severe contamination, such as China, India, and Pakistan, the book’s content spans a wide range of the subject areas that fall under the aquananotechnology banner, either squarely or tangentially. The book strongly emphasizes sorption media, with broad application to a myriad of contaminants—both geogenic and anthropogenic—keeping in mind that it is not enough for water to be potable, it must also be palatable.

, is a well-known early pioneer and entrepreneur in the burgeoning field of nanotechnology, having cofounded in 1996 two nanotech companies in Connecticut, Inframat® and US Nanocorp®. For nearly 15 years, he was CEO of both companies since founding, which were recognized in Y2002–Y2005 for their fast revenue growth as Deloitte & Touche Connecticut Technology Fast50 Award recipients. In 2004, The Nano Group Inc. was formed as a parent holding company for investment. Reisner and cofounders were featured in Forbes magazine in 2004.
David has more than 175 publications and is an inventor on 10 issued patents. He is the editor for the Bionanotechnology sections of both the third edition of The BioMedical Engineering Handbook (CRC Press) and the Handbook of Research on Biomedical Engineering Education and Advanced Bioengineering Learning (IGI Global). He is editor of Bionanotechnology: Global Prospects (CRC Press) and Bionanotechnology II: Global Prospects (CRC Press). He has written articles on the business of nanotechnology in Nanotechnology Law & Business as well as the Chinese publication Science & Culture Review.
David served a 3-year term as a Technology Pioneer for the World Economic Forum and was a panelist at the 2004 Annual Meeting in Davos. David has served on the Board of the Connecticut Venture Group and was Chairman of the Board of the Connecticut Technology Council from 2005 to 2009. He was a NASA NanoTech Briefs Nano50 awardee in 2006. For his efforts in the field of medical implantable devices, he won the first annual BEACON award for Medical Technology in 2004. He is a member of the Connecticut Academy of Science and Engineering.
David is a 1978 University Honors graduate from Wesleyan University and received his PhD from Massachusetts Institute of Technology in 1983 in the field of chemical physics. An avid hiker, he summited Kilimanjaro in 1973 and is an Adirondak “46R.” David was recognized for his historic preservation efforts in 1994 when he received the Volunteer Recognition Award jointly from the Connecticut Historical Commission and the Connecticut Trust for Historic Preservation. He is known nationally for his expertise in vintage Corvette restoration and documentation. David did volunteer work in Jérémie, Haiti, soon after the January 2010 earthquake.

, is a professor of chemistry at the Indian Institute of Technology Madras, Chennai, India. He earned his PhD from the Indian Institute of Science in 1991 and had postdoctoral training at the Lawrence Berkeley Laboratory, University of California, Berkeley, and Purdue University, West Lafayette, Indiana. He held visiting positions at many leading universities and institutes in the United States, Europe, and Asia.
Prof. Pradeep’s research interests are in molecular and nanoscale materials, and he develops instrumentation for those studies. He has authored 300 scientific papers in journals and is an inventor in 50 patents or patent applications. He is involved with the development of affordable technologies for drinking water purification. He discovered that noble metal nanoparticles can remove halocarbon pesticide residues from drinking water, and that became the first nanomaterials-based technology to be commercialized in the drinking water segment. Along with his associates, he has incubated a company to develop technologies developed in his laboratory to marketable products.
He is a recipient of several coveted recognitions in India, including the Shanti Swaroop Bhatnagar Prize (most prestigious prize in India for scientists below age 45), B.M. Birla Science Prize (an important recognition in India for scientists below age 40), National Award for Nanoscience and Nanotechnology, and the India Nanotech Innovation Award. He is an adjunct professor at the Institute of Life Sciences, Ahmedabad University, and PSG Institute of Advanced Studies, Coimbatore. He is a fellow of the Indian Academy of Sciences and Indian National Academy of Engineering. He is on the editorial board of journals such as Nano Reviews, ACS Applied Materials & Interfaces, Particle, and Surface Innovations and is an Associate Editor of ACS Sustainable Chemistry & Engineering. His other interests include education, popularization of science, and development of advanced teaching aids. He has authored a few popular science books in Malayalam and is the recipient of the Kerala Sahitya Academi Award for knowledge literature for the year 2010. For more information, please see http://www.dstuns.iitm.ac.in/pradeep-research-group.php.

"Aquananotechnology: Global Prospects provides a comprehensive roadmap for emerging technologies for the water industry. From access to water to repair of the water infrastructure, this is an encyclopedia of how to solve our worldwide water problems. It is a must read for water technologists."
—Vincent Caprio, Water Innovations Alliance Foundation, Shelton, Connecticut, USA

"Governments, as well as businesses in sectors as diverse as agriculture, power generation, and manufacturing, know that water is central to their economic activities. Aquananotechnology: Global Prospects highlights water technologies that continue to push the boundaries of material science and innovation to reach new breakthroughs of cost and performance—vital for sustainable economic growth and profitability."
—Snehal Desai, Dow Water and Process Solutions, Edina, Minnesota, USA

"With water quality and scarcity destined to be enduring global megatrends for next century, Aquananotechnology: Global Prospects depicts an impressive array of breakthrough approaches to water treatment. The topics span from innovations in ridding drinking water of trace contaminants to cutting-edge technologies to solve the newest water challenges, such as those posed by fracking and the treatment of ballast water on cargo ships."
—Deane Dray, water investment analyst and advisor to the United Nations, New York City, USA

"The world needs diverse solutions to our pressing water scarcity and quality challenges. This book showcases a refreshing variety of forward-thinking approaches through a distinctly global perspective. I recommend this as a must read for experienced practitioners and newcomers alike."
—Dr. Phil Rolchigo, Pentair, Minneapolis, Minnesota, USA