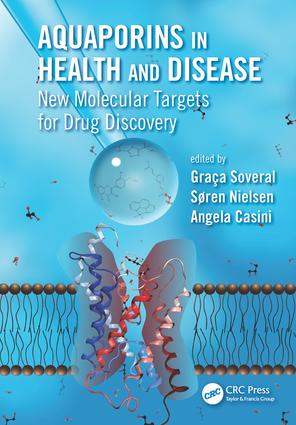 Aquaporins in Health and Disease

Since the discovery of Aquaporin-1 (AQP1) as a water channel, many studies have revealed the importance of aquaporins in mammalian physiology and pathophysiology as well as plant and microbial biology. The studies have also shown aquaporins as potential drug targets and targets for improving crop properties.

Written by an international group of contributors at the forefront of the field, Aquaporins in Health and Disease: New Molecular Targets for Drug Discovery presents the latest research advances in aquaporins and other major intrinsic protein (MIP) channels. The first section of the book describes the general concepts of aquaporin channel function, genomic research, structure-function analysis of aquaporins and glycerol facilitators, and regulation by gating and trafficking, including yeast aquaporin regulation and function. The second section discusses the physiological and pathophysiological roles of aquaporins in humans and microbes. The final section covers the development of inhibitors of aquaporin function. The book’s epilogue offers future perspectives and directions, mainly in the area of aquaporin-based diagnostics and therapeutics.

Stimulating future research on this important protein family, this book facilitates a paradigm shift in the understanding and roles of aquaporin membrane proteins in all biological settings. It encourages scientists to develop novel approaches for the treatment of human diseases based on aquaporin function or dysfunction.

MECHANISMS OF FLUID TRANSPORT IN CELLS AND EPITHELIA

Aquaporin Discovery in the Genomic Era

Yeast Aquaporins and Aquaglyceroporins: A Matter of Lifestyle

AQUAPORINS IN HEALTH AND DISEASE

Vasopressin and the Regulation of Aquaporin-2 in Health and Disease

Hepatobiliary, Salivary Glands and Pancreatic Aquaporins in Health and Disease

Inorganic Compounds as Aquaporin Substrates or as Potent Inhibitors: A Coordination Chemistry Point of View

Graça Soveral is an associate professor in the Pharmacy School at the University of Lisbon and principal investigator at the Research Institute for Medicines (iMed.ULisboa), where she coordinates the Biological Transport Unit. She received a PhD in pharmacy, sub-area biochemistry, from the University of Lisbon. Her main research area is membrane transport, with a special emphasis on water and solute transport in cell physiology and osmoregulation, aquaporin gating, and the discovery of aquaporin modulators for diagnostic and therapeutic applications.

is a professor in the Department of Health Science and Technology at Aalborg University. He received an MD and a dr.med.sci degree in medical sciences from Aarhus University. His research involves the cell and molecular biological, physiological, and pathophysiological studies of aquaporin membrane water channels (aquaporins), sodium channels, and transporters in kidney and other organs to explore their role in water and sodium balance regulation in health and disease.