Arabic Christianity in the Monasteries of Ninth-Century Palestine 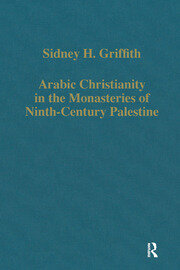 Arabic Christianity in the Monasteries of Ninth-Century Palestine

Contents: Preface; The prophet Muhammad, his scripture and his message, according to the Christian apologies in Arabic and Syriac from the first Abbasid century; The Gospel in Arabic: an inquiry into its appearance in the first Abbasid century; The monks of Palestine and the growth of Christian literature in Arabic; Eutychius of Alexandria on the emperor Theophilus and Iconoclasm in Byzantium: a 10th-century moment in Christian apologetics in Arabic; Theodore Abu Qurrah's Arabic tract on the Christian practice of venerating images; Free will in Christian kalam: the doctrine of Theodore Abu Qurrah; Stephen of Ramlah and the Christian kerygma in Arabic in 9th- century Palestine; Greek into Arabic: life and letters in the monasteries of Palestine in the 9th century; the example of the Summa Theologiae Arabica; A 9th-century Summa Theologiae Arabica; The Arabic account of ’Abd al-Masih an-Nagrani al-Ghassani; Anthony David of Baghdad, scribe and monk of Mar Sabas: Arabic in the monasteries of Palestine; Additions; Index.

'...the book is a valuable contribution towards understanding Eastern Christianity in the Arab world.' Muslim World Book Review, No 4