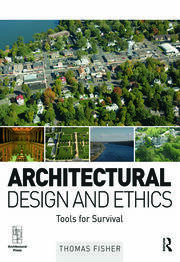 Architectural Design and Ethics offers both professional architects and architecture students a theoretical base and numerous suggestions as to how we might rethink our responsibilities to the natural world and design a more sustainable future for ourselves. As we find ourselves on the steep slope of several exponential growth curves – in global population, in heat-trapping atmospheric gases, in the gap between the rich and poor, and in the demand for finite resources, Fisher lays down a theory of architecture based on ethics and explores how buildings can and do provide both social and moral dimensions. The book also has practical goals, demonstrating how architects can make better and more beautiful buildings whilst nurturing more responsible, sustainable development. Architectural Design and Ethics will prove an invaluable text not only to those in the architecture field, but to anyone simply interested in the ethical issues surrounding our built environment.