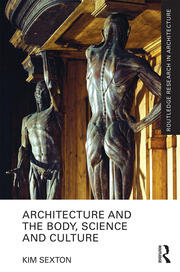 The relationship of architecture to the human body is a centuries-long and complex one, but not always symmetrical. This book opens a space for historians of the visual arts, archaeologists, architects, and digital humanities professionals to reflect upon embodiment, spatiality, science, and architecture in premodern and modern cultural contexts.

poses one overarching question: How does a period’s understanding of bodies as objects of science impinge upon architectural thought and design? The answers are sophisticated, interdisciplinary explorations of theory, technology, symbolism, medicine, violence, psychology, deformity, and salvation, and they have unexpected and fascinating implications for architectural design and history. The new research published in this volume reinvigorates the Western survey-style trajectory from Archaic Greece to post‐war Europe with scientifically‐framed, body‐centred provocations.

By adding the third factor—science—to the architecture and body equation, this book presents a nuanced appreciation for architectural creativity and its embeddedness in other sets of social, institutional and political relationships. In so doing, it spatializes body theory and ties it to the experience of the built environment in ways that disturb traditional boundaries between the architectural container and the corporeally contained.

Kim Sexton is an associate professor of architectural history at the University of Arkansas, USA. Her research focuses on the architecture and urban space of Italian city-states in the late Middle Ages and Renaissance. She is the author of articles published in the Journal of the Society of Architectural Historians and The Art Bulletin, and the upcoming book, The Loggia: Living on Stage in Early Modern Italy.