Architecture and the Politics of Gender in Early Modern Europe 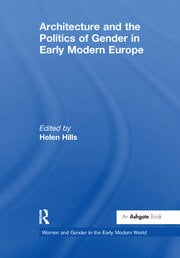 Architecture and the Politics of Gender in Early Modern Europe

Written by leading scholars in the field, the essays in this book address the relationships between gender and the built environment, specifically architecture, in early modern Europe. In recent years scholars have begun to investigate the ways in which architecture plays a part in the construction of gendered identities. So far the debates have focused on the built environment of the nineteenth and twentieth centuries to the neglect of the early modern period. This book focuses on early modern Europe, a period decisive for our understanding of gender and sexuality. Much excellent scholarship has enhanced our understanding of gender division in early modern Europe, but often this scholarship considers gender in isolation from other vital factors, especially social class. Central to the concerns of this book, therefore, is a consideration of the intersections of gender with social rank. Architecture and the Politics of Gender in Early Modern Europe makes a major contribution to the developing analysis of how architecture contributes to the shaping of social relations, especially in relation to gender, in early modern Europe.

Contents: Introduction: Theorizing the relationships between architecture and gender in early modern Europe, Helen Hills; Production: architects and patrons: A noble residence for a female regent: Margaret of Austria and the construction of the 'Court of Savoy' in Mechelen, Dagmar Eichberger; The Val-de-GrÃ¢ce as a portrait of Anne of Austria: Queen, Queen Regent, Queen Mother, Jennifer G. Germann; The architecture of institutionalism: women's space in renaissance hospitals, Eunice D. Howe; Women and the practice of architecture in 18th-century France, Tanis Hinchcliffe; Practice and Resistance: 'Repaired by me to my exceeding great cost and charges': Anne Clifford and the uses of architecture, Elizabeth V. Chew; 'Women in wolves' mouths': nun's reputations, enclosure and architecture at the convent of the Le Murate in Florence, Saundra Weddle; Spatial discipline and its limits: nuns and the built environment in early modern Spain, Elizabeth A. Lehfeldt; Spaces shaped for spiritual perfection: convent architecture and nuns in early modern Rome, Marilyn Dunn; Women in the charterhouse: the liminality of cloistered spaces at the Chartreuse de Champmol in Dijon, Sherry C. M. Lindquist; Select Bibliography, Index.

Helen Hills is a Professor in the Department of History of Art, University of York. She is also the author if Invisible City: The Architecture of Aristocratic Convents in Baroque Naples (OUP, 2002).

'A significant collection that sheds light on both well-known and less-familiar patrons, monuments, and practitioners, while highlighting issues to do with masculinities, femininities and the built environment in early modern Europe.' Sheila ffolliott, Professor of Art History, George Mason University, USA

’... an important contribution to the study of gender and space in early modern Europe.’ Urban History