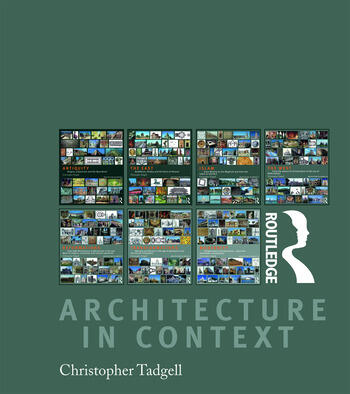 Architecture in Context is a series of seven books describing and illustrating all the seminal traditions of architecture from the earliest settlements in the Euphrates and Jordan valleys to the stylistically and technologically sophisticated buildings of the second half of the twentieth century. It brings together the fruits of the author’s lifetime of teaching and travelling the world, seeing and photographing buildings in an extraordinary synthesis. Each stand-alone volume sets the buildings described and illustrated within their political, technological, social and cultural contexts, exploring architecture not only as the development of form but as an expression of the civilization within which it evolved.

The series focuses on the story of the Classical tradition from its origins in Mesopotamia and Egypt, through its realization in ancient Greece and Rome, to the Renaissance, Neo-Classicism, Eclecticism and Modernism. This thread is supplemented with detailed excursions to cover the development of architecture in Central America, India, South-East Asia, and the Islamic world.

For students of architecture and art history, for travellers, and for readers who want to understand the genesis of the buildings they see around them, each volume provides a complete, readable and superbly illustrated reference.

The first in this series of seven books, it describes the origins of the Classical tradition in the mountain temples of Sumer, the pyramids of Egypt and the ziggurats of Mesopotamia.

The East describes and illustrates the seminal architectural traditions of the world, is a survey of unparalleled range and depth and also provides their political, technological, social and cultural contexts.

The architecture of Islam comprises a high proportion of the world’s most beautiful buildings, from perhaps the most perfect images of the lost Eden in the gardens of the Alhambra, to the built expression of the boundless expansion of the faith to be seen in the mosques of Ottoman Istanbul.

This volume tells the story of European architecture in the ‘middle ages’ – from the destruction by northern barbarians of Rome and the urban society it had fostered to the rediscovery of Classical values and the rebirth of humanism in 15th-century Italy.

This fifth volume traces the rediscovery of Classical ideas and the emergence of the great artists and architects of late-15th- and early 16th-century Italy that led to the cultural peak characterized as the High Renaissance.

Like its companion volume on the High Renaissance, Mannerism – this sixth volume traces the development of architecture and decoration in the 17th and early 18th centuries – particularly the transformation of rationalist Classical ideals into the emotive, highly theatrical style known as Baroque.

Modernity is a comprehensive survey of European architecture from the pre-dawn of the Enlightenment in early Georgian England; to the triumph of Brutalism in the seventh decade of the twentieth century; on to a sketch of major trends building up to the turn of the millennium.

"This amazing publishing achievement outfaces even Sir Banister Fletcher's A History of Architecture (now in its 21st edition) that is so well-known to generations of architectural students. Christopher Tadgell's scholarly tour de force covers the same ground, in more detail, single-handedly, and is moreover profusely illustrated with his own colour photographs, which are of professional quality. His architectural survey spans the whole of world history, from Antiquity to the present day.

…For those who dislike flying, leafing through the illustrations provides an alternative world tour, with the author's clear, scholarly accompaniment making him the best of Ciceronis. The text, in its range, clarity, depth of research, scope and insight, is a suitable match for the glorious illustrations.

…This massive publishing achievement is in the tradition of the great Anglo-German encyclopaedic works of the 19th century.

…The fruits fill these seven fat volumes. Not everybody will be able to house the full series, but each volume provides a readable and superbly illustrated coverage of its subject…" John Martin Robinson, Country Life, May 9, 2018