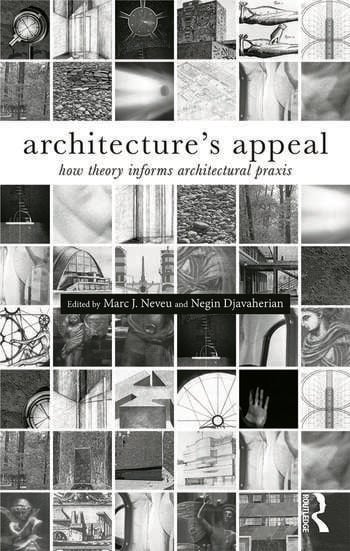 This collection of previously unpublished essays from a diverse range of well-known scholars and architects builds on the architectural tradition of phenomenological hermeneutics as developed by Dalibor Veseley and Joseph Rykwert and carried on by David Leatherbarrow, Peter Carl and Alberto Pérez-Gómez.

Given the recent fascination with all things digital and novel, what is the role of history and theory in contemporary architectural praxis?

Is authentic meaning possible in a technological environment that is so global and interconnected?

What is the nature and role of the architect in our shared modern world?

How can these questions inform a new model of architectural praxis?

is a thought-provoking book which will inspire further scholarly inquiry and act as a basis for discussion in the wider field as well as graduate seminars in architectural theory and history.

Acknowledgements.  Introduction Marc Neveu and Negin Djavaherian  Part 1: Invoking the Gods  1. The Reading Chamber  Robert Kirkbride  2. The Tower of Babel and Jacob's Pillar: Hegel, Heidegger, and the Death of Architecture  Karsten Harries  4. Reading What is Written Between the Lines: The Esoteric Dimension of Ebenezer Howard's Garden Cities of To-Morrow  Paul Emmons  4.On Virtue and Thomas Jefferson  Indra Kagis McEwen  Interlude A: The Architect's Fall  Santiago de Orduña  Part 2: Worldmaking  5. Made in Usage: Architecture in Furetière’s Dictionnaire Universel  Caroline Dionne  6. Beyond Expression  Lily Chi  7. On Water and Other Fluids: A Bloody Account of Urban Circulation  Louise Pelletier  8. Earth or World? Aerial Image and the Prosthetic Imagination  Lawrence Bird  Interlude B: The Door of Theory  Marco Frascari  Part 3: Flesh/Eros  9. Tough Love: A Study of the Architecture of Pezo von Ellrichshausen  David Leatherbarrow  10. Flesh of Stone: Buildings, Statues, Entangled Bodies  Tracey Eve Winton  11. Genius as Eros  Lian Chikako Chang  12. The Tactile Legacy of Alvar Aalto and its Relevance to Contemporary Practice  Kenneth Frampton  Interlude C: Sigmund Freud or the Dark Forest Room Revisited  Natalija Subotincic  Part 4: Fusion of Horizons  13. Voices of Tranquility: Silence in Art and Architecture  Juhani Pallasmaa  14. An Architectural Creation Myth Borrowed from the Phenomenology of Music  Stephen Parcell  15. Modus Operandi of an Architectus Doli: Architectural Cunning in the Comic Plays of Plautus  Lisa Landrum  16. Towards an Ecology of the Palladian Villa  Graham Livesey  Interlude D: Transformative Power of Architecture  Steven Holl  Part 5: After the Crisis  17. Juan O'Gorman and the Genesis and Overcoming of Functionalism in Mexican Modern Architecture  Juan Manuel Heredia  18. Architecture or Acceleration: Position as Opposition  Anne Bordeleau  19. Building Upon Love in an Age of Innovation  Peter Olshavsky  20. Content and Craft: What do we do when we do the History of Architecture?  David Theodore  Interlude E: Two Poems 2000-2011  Ricardo L. Castro  List of Figures.  List of Contributors.

Marc J. Neveu is Chair of the Department of Architecture at Woodbury University, Los Angeles, USA, and the Executive Editor of the Journal of Architectural Education.

'At a time when architectural theory might go unquestioned and the monologue of the technological paradigm and digital age seem to offer the possibility for an endless agenda and sense of progress, a group of well known scholars address the role of poetics and ethics within architecture providing insight from many and diverse angles. A must read for all those intending to gaze deeper into their own age from a contemporary perspective in architectural theory.' - Federica Goffi, Associate Professor, Architect, PhD Associate Director Graduate Programs Azrieli School of Architecture and Urbanism Carleton University, Canada

'Architecture’s Appeal is a timely reminder of the role of history and theory in a world so infatuated with technology and gratuitous formal explorations. At the very core of these reflections within the book is the belief that our past is relevant, and provides critical insight into new possible realities and roles yet to be invented for the architects of the future.' - Gregory Henriquez, Managing Partner, Henriquez Partners Architects, Canada