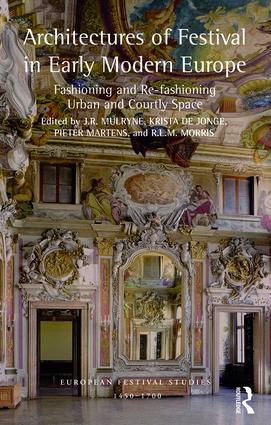 This fourth volume in the European Festival Studies, 1450–1700 series breaks with precedent in stemming from a joint conference (Venice, 2013) between the Society for European Festivals Research and the PALATIUM project supported by the European Science Foundation. The volume draws on up-to-date research by a Europe-wide group of academic scholars and museum and gallery curators to provide a unique, intellectually-stimulating and beautifully-illustrated account of temporary architecture created for festivals of the sixteenth and seventeenth centuries, together with permanent architecture pressed into service for festival occasions across major European locations including Italian, French, Austrian, Scottish and German. Appealing and vigorous in style, the essays look towards classical sources while evoking political and practical circumstances and intellectual concerns – from re-shaping and re-conceptualizing early sixteenth-century Rome, through providing for the well-being and political allegiance of Medici-era Florentines and exploring the teasing aesthetics of performance at Versailles to accommodating players and spectators in seventeenth-century Paris and at royal and ducal events for the Habsburg, French and English crowns. The volume is unique in its field in the diversity of its topics and the range of its scholarship and fascinating in its account of the intellectual and political life of Early Modern Europe.

1. A Productive Conflict: The Colosseum and Early Modern Religious Performance

3. Vienna, a Habsburg Capital Redecorated in Classical Style: The Entry of Maximilian II as King of the Romans in 1563

4. Fountains of Wine and Water and the Refashioning of Urban Space in the 1565 Entrata to Florence

5. Making the Best of What They Had: Adaptations of Indoor and Outdoor Space for Royal Ceremony in Scotland c. 1214 to 1603

6. From Ephemeral to Permanent Architecture: The Venetian Palazzo in the Second Half of the Seventeenth Century

7. Contested Ideals: Designing and Making Temporary Structures for the Entrée of Louis XIV into Paris in August 1660

8. Overcrowding at Court: A Renaissance Problem and Its Solution: Temporary Theatres and Banquet Halls

9. Transformed Gardens: The Trompe-l’œil Scenery of the Versailles Festivals (1664–1674)

10. Ephemeral and Permanent Architecture During the Age of Ercole I d’Este in Ferrara (1471–1505)

12. Permanent Places for Festivals at the Habsburg Court in Innsbruck: The "Comedy Houses" of 1628 and 1654

13. La Favorita festeggiante: The Imperial Summer Residence of the Habsburgs as Festive Venue

14. Between Props and Sets: The Menus Plaisirs Administration and Space Conversions in the French Court, 1660–1700

J.R. (Ronnie) Mulryne is Professor Emeritus at the University of Warwick, UK.

is Professor of Architectural History at the University of Leuven.

was elected a Senior Scholar of Trinity College, Cambridge, in 2011 and is now completing doctoral research there.

This series, in association with the Society for European Festivals Research, builds on the current surge of interest in the circumstances of European Festivals – their political, religious, social, economic and cultural implications as well as the detailed analysis of their performance (including ephemeral architecture, scenography, scripts, music and soundscape, dance, costumes, processions and fireworks) in both indoor and outdoor, urban and court locations. Festivals were interdisciplinary and, on occasion, international in scope. They drew on a rich classical heritage and developed a shared pan-European iconography as well as exploiting regional and site-specific features. They played an important part in local politics and the local economy, as well as international negotiations and the conscious presentation of power, sophistication and national identity. The series, including both essay collections and monographs, seeks to analyse the characteristics of individual festivals as well as to explore generic themes. It draws on a wealth of archival documentary evidence, alongside the resources of galleries and museums, to study the historical, literary, performance and material culture of these extravagant occasions of state.