Arendt, Agamben and the Issue of Hyper-Legality
In Between the Prisoner-Stateless Nexus 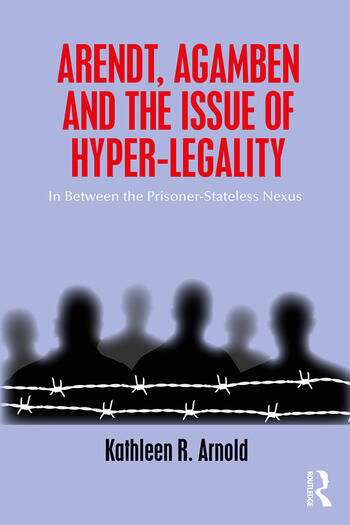 Arendt, Agamben and the Issue of Hyper-Legality: In Between the Prisoner-Stateless Nexus

In the Origins of Totalitarianism, Hannah Arendt famously argued that the stateless were so rightless, that it was better to be a criminal who at least had some rights and protections.

In this book, Kathleen R. Arnold examines Arendt’s comparison in the context of post-1996 U.S. criminal and immigration policies, arguing that the criminal-stateless binary is significant to contemporary politics and yet flawed. A key distinction made today is that immigrant detention is not imprisonment because it is a civil system. In turn, prisoners are still citizens in some respects but have relatively few rights since the legal underpinnings of "cruel and unusual" have shifted in recent times. The two systems – immigrant detention and the prison system – are also concretely related as they often house both populations and utilize the same techniques (such as administrative segregation). Arnold compellingly argues that prisoners are essentially made into foreigners in these spaces, while immigrants in detention are cast as outlaws.

Examining legal theory, political theory and discussing specific cases to illustrate her claims, Arendt, Agamben and the Issue of Hyper-Legality operates on three levels to expose the degree to which prisoners’ rights have been suspended and how immigrant policy and detention cast foreigners as inherently criminal. Less talked about, the government in turn expands sovereign, discretionary power and secrecy at the expense of openness, transparency and democratic community. This book will be of interest to scholars and students of contemporary political theory, philosophy and law, immigration, and incarceration.

2. Is it Better to be a Criminal Than a Stateless Person? Revisiting Arendt’s Famous Comparison

4. Democratic Sacrifice and Heroism in The Context of Tragedy

6. Conclusion: Is it Better to Be a Criminal Than a Stateless Person?

'A marvelous achievement, Arendt, Agamben and the Issue of Hyper-Legality uncovers the dark subtext to a democratic idealism that masks brute racism. Deeply researched and powerfully written, Arnold's book takes us through a disturbing but increasingly necessary examination of a country where law has become handmaiden to the worst excesses of stigma and criminalization.'—Colin Dayan, Professor at Vanderbilt University and author of The Law is a White Dog and With Dogs at the Edge of Life

'With a wide-ranging, sophisticated, and critically compassionate exploration of deep dilemmas within the U.S. immigration, "anti-terror," and criminal justice systems, Kathleen R. Arnold offers important insights and thoughtful proposals relating to sanctuary and due process. This book will be of great interest to those who seek to understand the realities and (overlapping) fates of migrants and disenfranchised citizens in the United States.'—Daniel Kanstroom, Professor of Law, Boston College Law School

'Arnold deftly illuminates how the state manipulates law and geography to further suspend the rights and diminish the personhood of those already on the margins of membership: prisoners, noncitizens, and immigrants. This timely book is both an astute work of political theory as well as a cutting political commentary on the increasing convergence of immigration and criminal law.'—Monica W. Varsanyi, City University of New York

'… the great contribution of Arendt, Agamben, and the Issue of Hyper-Legality: In Between the Prisoner-Stateless Nexus is its challenge to established disciplinary, conceptual, and thematic divisions in the study of confinement. Arnold not only adds to the burgeoning scholarship on mass incarceration and the immigrant detention and deportation regime but she also connects these phenomena to political theory debates about sovereignty, biopower, and the state of exception. Her arguments are relevant for all areas of political science and show that rigid boundaries between subfields and disciplines hinder our understanding of contemporary power arrangements.'—Anna Terwiel, Perspectives on Politics