Argentina's Economic Reforms of the 1990s in Contemporary and Historical Perspective 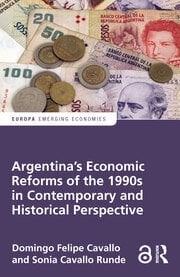 Argentina's Economic Reforms of the 1990s in Contemporary and Historical Perspective

Why has Argentina suffered so much political and economic instability? How could Argentina, once one of the wealthiest countries in the world, failed to meet its potential over decades? What lessons can we take from Argentina's successes and failures?

The book comprises two distinct components: an economic history of Argentina from the Spanish colonial period to 1990, followed by a narrative by Domingo Cavallo on the last 25 years of reform and counter reform.

Domingo Cavallo has been at the centre of Argentina's economic and political debates for 40 years. He was one of the longest serving cabinet members since the return of democracy in 1983. He is uniquely qualified to help the reader make the connection between historical and current events through all these prisms. His daughter, Sonia Cavallo Runde, is an economist specialized on public policy that currently teaches the politics of development policy. The two Cavallos offer academics and students of economics and finance a long form case study. This book also seeks to offer  researchers and policymakers around the world with relevant lessons and insights to similar problems from the Argentine experience.

Argentina’s Economic Reform of the 1990s in Historical Perspective

The southernmost territory of Imperial Spain turns into the Argentine Nation

Chapter 2: From the May Revolution to the National Organization

1953-1913, six decades of increasing integration into the global economy

Chapter 3: From the National Organization to First World War

Chapter 8: From the fall of Yrigoyen to the rise of Perón

Four and a half decades of political and economic instability

Chapter 11: The 18 years when Peronism was outlawed

Chapter 12: The return of Perón and the Military

Chapter 14: The Latin American Consensus of the 90s

Chapter 16: The origin of Duhalde’s decision and Kirchner’s metamorphosis

Chapter 17: Duhalde and the Kirchners

"Cavallo's book superbly travels the economic history legacy of Argentina to give a unique perspective on the contemporaneous policymaking process in a resilient conflictive Society."

"Domingo Felipe Cavallo and his daughter Sonia Cavallo Runde, have produced a masterful book. Superb! Full of fascinating insights. Highly instructive, thoughtful and very well researched. The authors provide a compelling analysis of Argentina, connecting its historical episodes with current events. Domingo Cavallo presents a first-hand insider’s view from the battlefields of economic policies. He is a courageous and patriotic warrior who fought hard to save Argentina from itself. This book is a must read! "

Dr Jacob A. Frenkel, Chairman, JPMorgan Chase International, Chairman, Board of Trustees of the Group of Thirty (G30) and Former Governor of the Bank of Israel

"The history the economics and the politics of Argentina, which promised so much at the onset, has been a long tragedy. This book provides a fascinating account that will benefit all those who want to understand better, students, scholars and practioners. Domingo Cavallo has been fully engaged, with all his energy, in the workings of that history and he takes the reader with him in his passion."

"Argentina’s history of policy mistakes and corrections has important lessons for all countries. Bad policies created high rates of inflation that weakened growth and destroyed financial institutions. Argentina has recovered in the past and is trying to do so again. This book is the best source for understanding this complex history. Domingo Cavallo brings unique insights and technical understanding to these complex issues."