Aristotelian Logic, Platonism, and the Context of Early Medieval Philosophy in the West 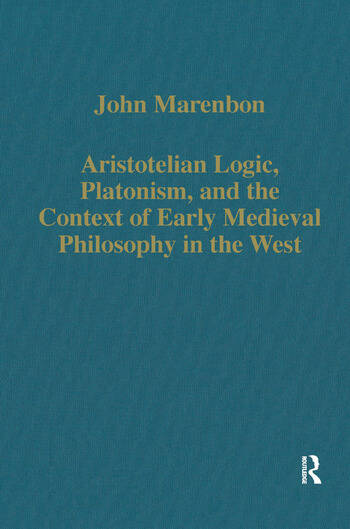 Aristotelian Logic, Platonism, and the Context of Early Medieval Philosophy in the West

Philosophy in the medieval Latin West before 1200 is often thought to have been dominated by Platonism. The articles in this volume question this view, by cataloguing, describing and investigating the tradition of Aristotelian logic in the period, examining its influence on authors usually placed within the Platonic tradition (Eriugena, Anselm, Gilbert of Poitiers), and also looking at some of the characteristics of early medieval Platonism. Abelard, the most brilliant logician of the age, is the main subject of three articles, and the book concludes with two more general discussions about how and why medieval philosophy should be studied.

Contents: Introduction; A survey and a catalogue: Medieval Latin commentaries and glosses on Aristotelian logical texts, before c. 1150 A.D., with a revised working catalogue;The Carolingian period: Carolingian thought; Alcuin, the Council of Frankfurt and the beginnings of medieval philosophy; John Scottus and the ’Categoriae Decem’; Wulfad, Charles the Bald and John Scottus Eriugena; John Scottus and Carolingian theology : from the De Praedestinatione, its background and its critics, to the Periphyseon; Anselm and the early 12th century: Anselm and the early medieval Aristotle; Glosses and commentaries on the Categories and De interpretatione before Abelard; Abelard: Abelard’s concept of possibility; Abelard’s ethical theory: two definitions from the Collationes; The Platonisms of Peter Abelard; The 12th century: Vocalism, nominalism and the commentaries on the Categories from the earlier 12th century; Gilbert of Poitiers (with a note on the Porretani;12th-century Platonism: old paths and new directions; Approaches to medieval philosophy: The theoretical and practical autonomy of philosophy as a discipline in the Middle Ages: Latin philosophy, 1250-1350; What is medieval philosophy?; Index.

John Marenbon has moved from a narrow analytic conception of philosophical rationality to a truly historical understanding of human reason in its different manifestations. For this reason, but not only for this reason, Aristotelian Logic, Platonism, and the Context of Early Medieval Philosophy in the West is an excellent book. We look forward to the future work of its prolific author.' Tijdschrift voor Filosofie