Armies and Politics in the Early Medieval West 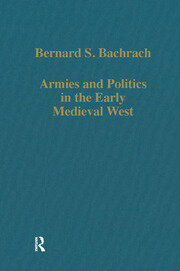 Armies and Politics in the Early Medieval West

Contents: Gildas, Vortigern and constitutionality in sub-Roman Britain; The questions of King Arthur’s existence and of Romano-British naval operations; The Alans in Gaul; Another look at the barbarian settlement in southern Gaul; The origin of Amorican chivalry; Two Alan motifs in Ã…berg’s Aquitanian style; Procopius and the chronology of Clovis’s reign; Procopius, Agathias and the Frankish military; Was the Marchfield part of the Frankish constitution?; Who were the Ripariolibriones?; A reassessment of Visigothic Jewish policy; Charles Martel, mounted shock combat, the stirrup and feudalism; Military organisation in Aquitaine under the early Carolingians; Charlemagne’s cavalry: myth and reality; On the role of the Jews in the establishment of the Spanish March (768-814); A picture of Avar-Frankish warfare from a Carolingian psalter of the early 9th century in light of the Strategicon; Animals and warfare in early medieval Europe; Index.