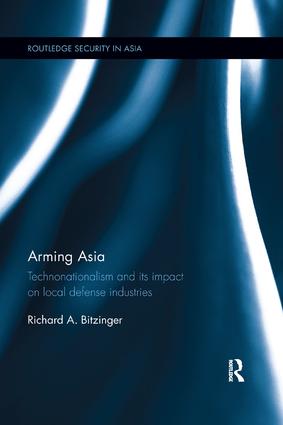 Technonationalism and its Impact on Local Defense Industries, 1st Edition

Bitzinger examines the phenomenon of attempted self-reliance in arms production within Asia, and assesses the extent of success in balancing this independence with the growing requirements of next-generation weapons systems. He analyzes China, India, Japan, South Korea, and Southeast Asia.

The overarching question in the book is whether self-reliance is a strategically viable solution for development and manufacturing of arms. Given the ever-changing dynamics and increasing demand for sophisticated next-generation weaponry, will these countries be able to individually sustain their domestic defense industries and constantly update their technologies?

This is the first book to analyze arms production from a regional perspective.

3. Chapter 1: Military Technonationalism and the Drive for Indigenous Arms Manufacturing

4. Chapter 2: Military Modernization in the Asia-Pacific: An Overview

7. Chapter 5: The Republic of Korea

9. Chapter 7: Conclusions: The Future of Military Technonationalism in Asia

Richard A. Bitzinger is Senior Fellow at the S. Rajaratnam School of International Studies, Nanyang Technological University in Singapore. He is the author of Towards a Brave New Arms Industry? (Oxford University Press, 2003), "Come the Revolution: Transforming the Asia-Pacific’s Militaries," Naval War College Review (Fall 2005), Transforming the U.S. Military: Implications for the Asia-Pacific (ASPI, December 2006), and "Military Modernization in the Asia-Pacific: Assessing New Capabilities," Asia’s Rising Power (NBR, 2010). He is also the editor of The Modern Defense Industry: Political, Economic and Technological Issues (Praeger, 2009) and Emerging Critical Technologies and their Impact on Asian-Pacific Security (Palgrave, 2016)