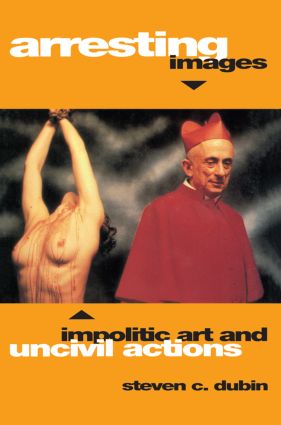 Although contemporary art may sometimes shock us, more alarming are recent attempts to regulate its display. Drawing upon extensive interviews, a broad sampling of media accounts, legal documents and his own observations of important events, sociologist Steven Dubin surveys the recent trend in censorship of the visual arts, photography and film, as well as artistic upstarts such as video and performance art. He examines the dual meaning of arresting images--both the nature of art work which disarms its viewers and the social reaction to it. Arresting Images examines the battles which erupt when artists address such controversial issues as racial polarization, AIDS, gay-bashing and sexual inequality in their work.

". . . Dubin has impressively documented a decade's developments, until now chronicled mostly in bits and pieces. His facts are well researched and marshaled; he writes with a sense of historical background, and he has all the players knowledgeably pegged. His account, for instance, of the feckless John Frohnmayer, the embattled former chairman of the National Endowment for the Arts, trapped in the pressure cooker that the job has become, is masterly. And as a map of the minefields that beset artists who would venture beyond the boundaries of conventional taste, this book is important." -- New York Times Book Review

"With exemplary clarity and insight, Steven Dubin assesses the growing maelstrom over `correct' art, censored art, and contentious art. Essential reading for anyone interested in these debates and controversies, and an important contribution to the sociology of the arts." -- Judith R. Blau, The University of North Carolina at Chapel Hill

"It is very good to have this thoughtful sociological approach to balance the mass of books by critics and philosophers." -- Choice

"Arresting Images is at once a timely inventory of the social resonance of art and an illumination of the forces that seek to limit the range of expression in the putative heartland of democracy. With its crisp prose and enormous scope, Dubin's book will prove an effective resource in support of informed public discussion over the direction of art and society." -- Randy Martin, Pratt Institute

"Steven Dubin's book should be read by everyone and anyone who follows the weft and warp of the political weave as it winds through the nasty carnival of late twentieth-century America." -- Chicago Artists' News

"Dubin's detailed and finely nuanced study is vital to an understanding of why certain artworks have become so controversial in recent years . . . this is a major contribution to the burgeoning field of cultural studies, by one of the sharpest observers of the current scene." -- Judith H. Balfe, City University of New York Graduate Center

"Arresting Images places recent art controversies in their social setting. In Dubin's work, we see artists speaking out or questioning their world through their images, while politicians and other groups seek to protect their version of what is respectable." -- Free Expression, A Quarterly for the American Booksellers Foundation for Free Expression

"…the kind of analysis we've needed for some time, namely a macro-level examination of recent art-political troubles that would help us understand the disparate events of the period as a whole." -- Mitchell Stevens, Art in America

"Dubin has evolved into one of the country's most eloquent and forceful advocates of open expression." -- New City Times

"Drawing upon extensive interviews, a broad sampling of media accounts, legal documents and his own observations of important events, Steven Dubin surveys the censorship issues surrounding visual art, pornography and film, as well as artistic upstarts such as video and performance art. He examines both the nature of the art work which disarms its viewers and the social reaction to it. Combining the eye of an aesthete and the rigor of a social scientist, Dubin offers provocative insights into contemporary society and politics." -- Canadian Journal of Communication, V20, 1995

Steven C. Dubin is Associate Professor of Sociology at the State University of New York, Purchase, where he directs the Social Sciences and the Arts program. He is the author of Bureaucratizing the Muse: Public Funds and the Cultural Worker.