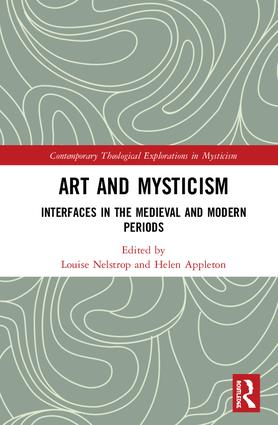 Interfaces in the Medieval and Modern Periods, 1st Edition

From the visual and textual art of Anglo-Saxon England onwards, images held a surprising power in the Western Christian tradition. Not only did these artistic representations provide images through which to find God, they also held mystical potential, and likewise mystical writing, from the early medieval period onwards, is also filled with images of God that likewise refracts and reflects His glory. This collection of essays introduces the currents of thought and practice that underpin this artistic engagement with Western Christian mysticism, and explores the continued link between art and theology.

The book features contributions from an international panel of leading academics, and is divided into four sections. The first section offers theoretical and philosophical considerations of mystical aesthetics and the interplay between mysticism and art. The final three sections investigate this interplay between the arts and mysticism from three key vantage points.

The purpose of the volume is to explore this rarely considered yet crucial interface between art and mysticism. It is therefore an important and illuminating collection of scholarship that will appeal to scholars of theology and Christian mysticism as much as those who study literature, the arts and art history.

"Ultimately, Art and Mysticism offers a worthy contribution to contemporary discussions of both art and theology, in ways that are often strikingly original and consistently thought provoking. Moreover, by situating the array of presented subject matter within the broader conversation concerning the role of mediation, representation, and perception in religious thought and practice, this book makes the compelling claim that the study of mysticism is crucial to the study (and practice) of art, and that art illuminates mystical traditions in ways that have been neglected for too long."

Art, Articulation and Incarnation: Mystical Theology and Seeing the Invisible

PART I: Art, Aesthetics and Mysticism in Theory and Practice

1 Beneath the Surface: Whose Phenomenology? Which Art?

3 Art, Contemplation and intellectus: Aquinas and Gadamer in Conversation

5 Art and Mysticism as Horticulture: Late Medieval Enclosed Gardens of the Low Countries in an Interdisciplinary Perspective

8 The Desert of Religion: A Voice and Images in the Wilderness

Part IV: Into the Darkness

11 Visions of the Otherworld: The Accounts of Fursey and Dryhthelm in Bede’s Historia Ecclesiastica and in the Homilies of Ælfric

12 The Gaze of Divine Sorrow: Vision and Mystical Unionin Dürer, Cusa, and the Theologia Germanica

Helen Appleton is a Career Development Fellow in Old and Early Medieval English at Balliol College, Oxford. She has published on early medieval poetry and hagiography, and is also a co-organiser of The Oxford Psalms Network. Her principal research area is the relationship between religious devotion and the environment in Anglo-Saxon England.

is a lecturer in Religion, Philosophy and Ethics at York St John University and a College Lecturer in Theology at St Benet’s Hall, Oxford. She is co-editor of several earlier volumes in the series, most recently Mysticism in the French Tradition: Eruptions from France with Bradley B. Onishi. She has published several articles on the English Mystics and is also a convenor of The Mystical Theology Network.

Although the primary focus of the series is the Christian tradition, exploration of texts from other traditions also highlight the theological, psychological and philosophical questions that Christian mysticism brings to the fore.