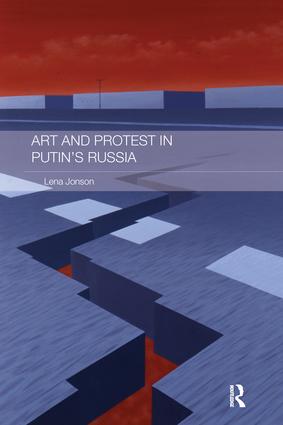 Art and Protest in Putin's Russia

The Pussy Riot protest, and the subsequent heavy handed treatment of the protestors, grabbed the headlines, but this was not an isolated instance of art being noticeably critical of the regime. As this book, based on extensive original research, shows, there has been gradually emerging over recent decades a significant counter-culture in the art world which satirises and ridicules the regime and the values it represents, at the same time putting forward, through art, alternative values. The book traces the development of art and protest in recent decades, discusses how art of this kind engages in political and social protest, and provides many illustrations as examples of art as protest. The book concludes by discussing how important art has been in facilitating new social values and in prompting political protests.

"The analysis highlights the importance of the cultural sphere in the construction of challenges to Putin’s hegemonic discourse. Summing Up: Recommended. Upper-division undergraduates and above."

"Lena Jonson’s Art and Protest in Putin’s Russia is a very well-researched evaluation of the arts community and potential of counterculture to consolidate itself and confront rigid political structures."

1. Introduction 2. A History of Dissensus, Consensus and Illusions of a New Era 3. An Other Gaze in Art 4. Art on Trial 5. Dissent in Art 6. Art of Engagement: A Counterculture in the Making 7. Political Action 8. Art and Protest After Bolotnaya 9. Conclusions

Lena Jonson is Senior Research Fellow and Head of the Russia Research Program at the Swedish Institute of International Affairs, Stockholm