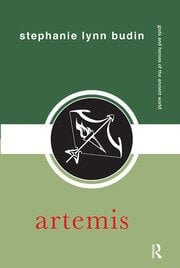 Artemis is a literary, iconographic, and archaeological study of the ancient Greek goddess of the hunt, who presided over the transitions and mediations between the wild and the civilized, youth and maturity, life and death. Beginning with a study of the early origins of Artemis and her cult in the Bronze and Archaic Ages, Budin explores the goddess' persona and her role in the lives of her worshippers.

This volume examines her birth and childhood, her place in the divine family, her virginity, and her associations with those places where the wilds become the "cities of just men." The focus then turns to Artemis’ role in the lives of children and women, particularly how she helps them navigate the transition to adulthood and, perhaps too often, death. Budin goes on to reconsider some of the more harrowing aspects of Artemis’ mythology, such as plague and bloodshed, while also examining some of her kinder, oft overlooked associations. Finally, the role of Artemis in the Renaissance and modern society is addressed, from the on-going fascination with the "breasts" on the statue of Artemis of Ephesos to the Artemisian aspects of Katniss Everdeen.

Written in an accessible style, Artemis is a crucial resource for students not only of Greek myth, religion and cult, but also those seeking to understand the lives and roles of girls and women in ancient Greece, as this goddess presided over their significant milestones, from maiden to wife to mother.

1 An Early History of Artemis

2 The Childhood and Perpetual Virginity of Artemis

3 Artemis of the Wilds

6 Artemis as Goddess of Plague and Cruelty

7 Some Underappreciated Aspects of Artemis

Stephanie Lynn Budin is an ancient historian who focuses on ancient Greece and the Near East. Her published works include Images of Woman and Child from the Bronze Age (2011), The Ancient Greeks: An Introduction (2009), The Myth of Sacred Prostitution in Antiquity (2008) and The Origin of Aphrodite (2003), as well as numerous articles on ancient religion and iconography.

"Stephanie Budin’s Artemis is a richly detailed and engaging study that offers a welcome contribution to the fields of Greek religion and mythology. Expertly weaving together evidence from literary texts and inscriptions, archaeology and the visual arts, Budin uncovers the many meanings and layers of Artemis through her origin stories, her iconic roles as virgin and huntress, and her mediating function as a goddess of critical female transitions. With the passion and wit of a great teacher, Budin convincingly demonstrates that the worship of Artemis was truly a life-or-death matter for the ancient Greeks." - Monica S. Cyrino, University of New Mexico

"Although principally writing for undergraduates, historian Budin not only surveys the current scholarship but also argues for revisions; most compellingly, that Artemis was not associated with warfare, and that the evidence claimed for that view is from the Roman period, or is methodologically flawed. While rigorous, the volume remains clear and approachable: all Greek is translated; arguments based on Greek language are judiciously chosen and lucid. An important book for collections supporting study of mythology, religion, and literature, and likely to appeal to a broader audience...Summing Up: Highly recommended." - P. E. Ojennus, Whitworth University, CHOICE