‘Artes’ and Bible in the Medieval West 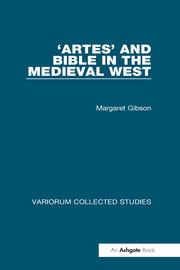 ‘Artes’ and Bible in the Medieval West

Contents: Preface; The ’Artes’ in the 11th century; The collected works of Priscian: the printed editions 1470-1859; The early scholastic glosule to Priscian, Institutiones grammaticae: the text and its influence; Introduction to J.E. Tolson, ’The Summa of Petrus Helias on Priscianus Minor’; Milestones in the study of Priscian, c.800-c.1200; Boethius in the Carolingian schools; Codices Boethiani; Latin commentaries on logic before 1200; The study of the Timaeus in the 11th and 12th centuries; The continuity of learning, c.850-c.1050; Theodore of Mopsuestia: a fragment in the Bodleian Library; Lanfranc’s commentary on the Pauline epistles; Lanfranc’s notes on patristic texts; The 12th-century Glossed Bible; The place of the Glossa ordinaria in medieval exegesis; The Opuscula sacra in the Middle Ages; A picture of Sapientia from S. Sulpice Bourges; Letters and charters relating to Berengar of Tours; Adelard of Bath; History at Bec in the 12th century; Index of manuscripts; General Index.