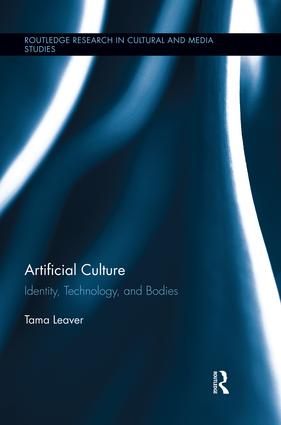 Artificial Culture is an examination of the articulation, construction, and representation of "the artificial" in contemporary popular cultural texts, especially science fiction films and novels. The book argues that today we live in an artificial culture due to the deep and inextricable relationship between people, our bodies, and technology at large. While the artificial is often imagined as outside of the natural order and thus also beyond the realm of humanity, paradoxically, artificial concepts are simultaneously produced and constructed by human ideas and labor. The artificial can thus act as a boundary point against which we as a culture can measure what it means to be human. Science fiction feature films and novels, and other related media, frequently and provocatively deploy ideas of the artificial in ways which the lines between people, our bodies, spaces and culture more broadly blur and, at times, dissolve.

Building on the rich foundational work on the figures of the cyborg and posthuman, this book situates the artificial in similar terms, but from a nevertheless distinctly different viewpoint. After examining ideas of the artificial as deployed in film, novels and other digital contexts, this study concludes that we are now part of an artificial culture entailing a matrix which, rather than separating minds and bodies, or humanity and the digital, reinforces the symbiotic connection between identities, bodies, and technologies.

"Leaver’s Artificial Culture is a positive step in our greater understanding of contemporary culture, and I applaud his attempts at grappling with literary and film media in a single volume. […] Libraries are encouraged to purchase a copy because its breadth of research topics and theoretical approaches will appeal to a broad base of scholars." - Jason W. Ellis, CUNY

"Artificial Culture is a wide-ranging and well-researched analysis of some important cultural sites that share crucial features of ‘artificiality’, specifically technologically driven artificiality… Leaver is careful to foreground the specificities of cultural media, especially of film…[it would] be an appropriate text to include in graduate courses." - Veronica Hollinger, Trent University

Tama Leaver is a lecturer in the Internet Studies department at Curtin University of Technology.