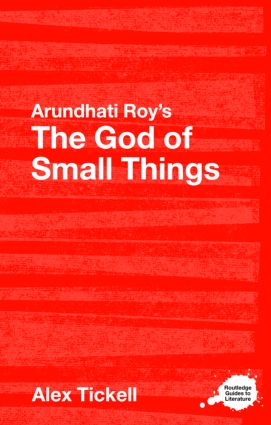 On publication Arundhati Roy's first novel The God of Small Things (1997) rapidly became an international bestseller, winning the Booker Prize and creating a new space for Indian literature and culture within the arts, even as it courted controversy and divided critical opinion.

Part of the Routledge Guides to Literature series, this volume is essential reading for all those beginning detailed study of The God of Small Things and seeking not only a guide to the novel, but a way through the wealth of contextual and critical material that surrounds Roy's text.

Introduction Part 1: Text and Contexts The Text. The Author. Cultural Contexts. Literary and Cinematic Contexts.Chronology Part 2: Critical History Part 3: Critical Readings Postcolonial Cultural Studies: The Making and Marketing of Arundhati Roy by Padmini Mongia. Marxist Criticism: Reading Arundhati Roy Politically by Aijaz Ahmad. Gender, Sexuality and Politics: In Desire and in Death: Eroticism as Politics in Arundhati Roy’s The God of Small Things by Brinda Bose. Language: Language, Hybridity and Dialogism in The God of Small Things by Anna Clarke. Narrative and Structure: The Structures of Memory by Émilienne Baneth-Nouailhetas. Genre and Performance: The Epic Side of Truth: Storytelling and Performance in The God of Small Things Alex Tickell Part 4: Further Reading and Web Resources

Alex Tickell is a Senior Lecturer in English at the University of Portsmouth. He has published widely on South-Asian fiction, and is the editor of Selections from Bengaliana (2005), and co-editor of Alternative Indias: Writing, Nation and Communalism (2005).