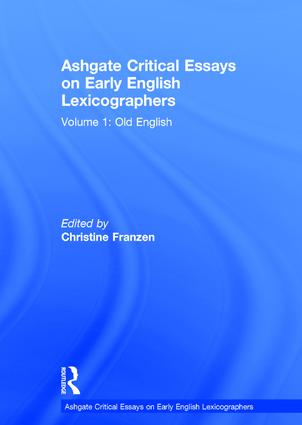 Anglo-Saxon lexicography studies Latin texts and words. The earliest English lexicographers are largely unidentifiable students, teachers, scholars and missionaries. Materials brought from abroad by early teachers were augmented by their teachings and passed on by their students. Lexicographical material deriving from the early Canterbury school remains traceable in glossaries throughout this period, but new material was constantly added. Aldhelm and Ã†lfric Bata, among others, wrote popular, much studied hermeneutic texts using rare, exotic words, often derived from glossaries, which then contributed to other glossaries. Ã†lfric of Eynsham is a rare identifiable early English lexicographer, unusual in his lack of interest in hermeneutic vocabulary. The focus is largely on context and the process of creation and intended use of glosses and glossaries. Several articles examine intellectual centres where scholars and texts came together, for example, Theodore and Hadrian in Canterbury; Aldhelm in Malmesbury; Dunstan at Christ Church, Canterbury; Ã†thelwold in Winchester; King Ã†thelstan's court; Abingdon; Glastonbury; and Worcester.

Christine Franzen was formerly at the School of English, Film and Theatre with Media Studies, Victoria University of Wellington, New Zealand.