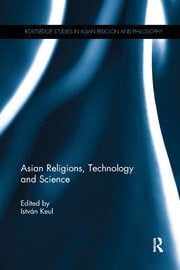 Over the past five decades, the field of religion-and-science scholarship has experienced a considerable expansion. This volume explores the historical and contemporary perspectives of the relationship between religion, technology and science with a focus on South and East Asia. These three areas are not seen as monolithic entities, but as discursive fields embedded in dynamic processes of cultural exchange and transformation. Bridging these arenas of knowledge and practice traditionally seen as distinct and disconnected, the book reflects on the ways of exploring the various dimensions of their interconnection.

Through its various chapters, the collection provides an examination of the use of modern scientific concepts in the theologies of new religious organizations, and challenges the traditional notions of space by Western scientific conceptions in the 19th century. It looks at the synthesis of ritual elements and medical treatment in China and India, and at new funeral practices in Japan. It discusses the intersections between contemporary Western Buddhism, modern technology, and global culture, and goes on to look at women’s rights in contemporary Pakistani media. Using case studies grounded in carefully delineated temporal and regional frameworks, chapters are grouped in two sections; one on religion and science, and another on religion and technology.

Illustrating the manifold perspectives and the potential for further research and discussion, this book is an important contribution to the studies of Asian Religion, Science and Technology, and Religion and Philosophy.

István Keul is Professor in the Study of Religions at the University of Bergen, Norway. His areas of research include various aspects of the history and sociology of South Asian religions. He is the author of a monograph on the Hindu deity Hanuman and has edited volumes on tantra, Yoginis and Banaras.