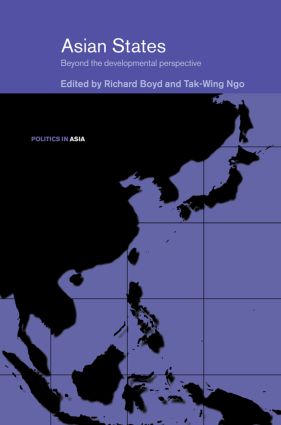 Beyond the Developmental Perspective, 1st Edition

A team of international leading experts provide a much needed re-examination of the theoretical claims and the empirical foundation of developmental state theory. Asian States argues that regardless of the merits of the developmental state as an explanation of economic growth, it falls far short of being an adequate theory of the state in Asia. The contributors critically review claims about agency, state-society and state-market relations that shape developmental projects. It broadens the analysis of state involvement in developmental projects and considers the variety of political and social bases for state projects across East and Southeast Asia in a theoretically sensitive, thematic and empirically rich way.

Notes on Contributors Preface 1. Emancipating the Political Economy of Asia from the Growth Paradigm 2. A Regulationist and State-Theoretical Analysis 3. The State-Market Condominium Approach 4. The Paradox of Weak Power and Strong Authority in the Japanese State 5. The Political Bases of Episodic Agency in the Taiwan State 6. Local State Structure and Developmental Incentives in China 7. Social Contradictions of the Korean State 8. The Political Economy of the Asian Welfare State 9. Transplanting the Neoliberal State in Southeast Asia References Index

Richard Boyd is Reader in the Law and Society of Japan at Leiden University, The Netherlands.

Tak-Wing Ngo is Lecturer in Chinese Politics at Leiden University, The Netherlands.