Asia's Financial Crisis and the Role of Real Estate 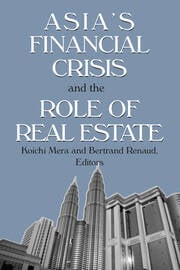 Asia's Financial Crisis and the Role of Real Estate

Considering the great influence textbooks have as interpreters of history, politics and culture to future generations of citizens, it is no surprise that they generate considerable controversy. Focusing largely on textbook treatment of lingering - and sometimes explosive - tensions originating in World War II, "Censoring History" addresses issues of textbook nationalism in historical and comparative perspective. Discussions include Japan's Comfort Women and the Nanjing Massacre; Nazi genocide against the Jews, Gypsies, Catholics and others; Hiroshima and Nagasaki, and the Indochina wars. The essays address controversies over textbook content around the globe: How and why do specific representations of war evolve? What are the international and national forces affecting how textbook writers, publishers and state censors depict the past? How do these forces differ from country to country? Other comparative essays analyze nationalist and war controversies in German, US and Chinese textbook debates.