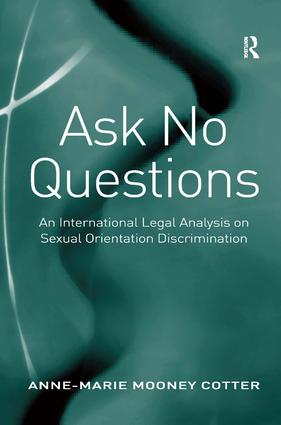 Ask No Questions provides readers with a better understanding of Sexual Orientation Discrimination as an increasingly important area of law around the world. It aims to increase the likelihood of achieving equality at national and international levels through a focus on the impact of primary role legislation on the court process, and a discussion on the two most important trade agreements of our day - namely the North American Free Trade Agreement and the European Union Treaty - in a historical and compelling analysis of discrimination. Anne-Marie Mooney-Cotter's sixth book in her series of volumes on discrimination law follows the approach and structure of her previous Ashgate volumes. Through a focus on the comparisons and contradictions of this type of law, and its detailed examination of the relationship between sexual orientation issues and the law, the book will be of importance to those concerned with equality.

'If you want to ask a question about sexual orientation and the law, you will likely find the answer in this book. Ask No Questions globally explores the issue of sexual orientation and the law: from Australia to North America, from Europe to Africa, from the United Nations to important International Trade Agreements.' Laurence Nolan, Howard University, USA 'This work constitutes a timely addition to previous works of Dr. Cotter on discrimination law. It conducts a detailed comparative analysis of the laws of major jurisdictions on the prevention of discrimination on the grounds of sexual orientation, particularly in the area of employment law. It will be a valuable addition to the collections of practising lawyers, students and employers.' Anthony Moore, Barrister, Ireland