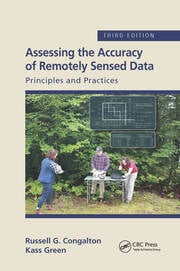 The past 10 years have brought amazing changes to the technologies used to turn remotely sensed data into maps. As a result, the principles and practices necessary for assessing the accuracy of those maps have also evolved and matured. This third edition of Assessing the Accuracy of Remotely Sensed Data: Principles and Practices is thoroughly updated and includes five new chapters. Now 15 chapters long, this text is the only one of its kind to provide geospatial analysts with the requisite considerations, tools, and theory necessary to conduct successful and efficient map accuracy assessments; and map users with the knowledge to fully understand the assessment process to ensure effective use of maps.

Assessing map accuracy is complex; however, the discussions in this book, together with the many figures, tables, and case studies, clearly present the necessary concepts and considerations for conducting an assessment that is both is practical, statistically reliable, and achievable.

Russell G. Congalton is Professor of Remote Sensing and GIS in the Department of Natural Resources and the Environment at the University of New Hampshire. He is responsible for teaching courses in geospatial analysis including The Science of Where, Remote Sensing, Photogrammetry and Image Interpretation, Digital Image Processing, and Geographic Information Systems. Russ has authored or coauthored more than 200 papers and conference proceedings. He is the author of twelve book chapters, co-editor of a book on spatial uncertainty in natural resource databases titled, Quantifying Spatial Uncertainty in Natural Resources: Theory and Applications for GIS and Remote Sensing, and is co-author of five books including the book, Imagery and GIS: Best Practices for Extracting Information from Imagery, published by ESRI in 2017. Russ served as President of the American Society for Photogrammetry and Remote Sensing (ASPRS) in 2004-2005, as the National Workshop Director for ASPRS from 1997 – 2008, and as Editor-in-Chief of Photogrammetric Engineering and Remote Sensing from 2008 – 2016. He was elected a Fellow in 2007 and an Honorary Member in 2016.

Dr. Congalton received a B.S. (Natural Resource Management) from Rutgers University in 1979. He earned an M.S. (1981) and a Ph.D. (1984) in remote sensing and forest biometrics from Virginia Tech. In addition to his academic position, Russ served as Chief Scientist of Pacific Meridian Resources from its founding in 1988 until 2000 and then as Chief Scientist of Space Imaging Solutions from 2000 – 2004. From 2004 until 2015, Russ held the position of Senior Technical Advisor with the Solutions Group of Sanborn, the oldest mapping company in the US. Finally, he has been the New Hampshire View Director, part of the AmericaView Consortium, since 2007 and has served as member, secretary, vice-chair, and chair of the AmericaView Board of Directors.

Kass Green’s experience spans thirty years of managing and supervising GIS and remote sensing professionals for vegetation mapping, as well as leadership in GIS and remote sensing research and policy. In 1988, Ms. Green co-founded Pacific Meridian Resources a GIS/remote sensing firm that she grew to 75 employees in 7 offices nationwide and sold to Space Imaging (now Digital Globe) in 2000. After running half of Space Imaging for 3 years, Ms. Green decided to focus her career on challenging remote sensing mapping and policy projects for public agencies, development organizations, and NGOs. Over the last ten years, Ms. Green has had the pleasure of using object oriented techniques to create detailed vegetation maps of Grand Canyon National Park, the national parks of Hawaii, and Sonoma County, California from high resolution optical imagery, lidar data, Landsat imagery, and multiple other data sets. Her work also includes international market studies and strategy papers for organizations such as the Omidyar Network, The Bill and Melinda Gates Foundation, and the UK Department of International Development (DFID).

Ms. Green is a fellow and a lifetime honorary member of the American Society of Photogrammetry and Remote Sensing (ASPRS), and a past president of both MAPPS and ASPRS. She is the principle author of a recently published text for Esri Press titled Imagery and GIS: Best Practices for Extracting Information from Imagery. Ms. Green chairs NASA’s Earth Science Applications Committee, co-founded and chaired the Dept. of the Interior’s Landsat Advisory Group, and participated in the Landsat Science Team from 2013-17 as an ex-officio member.