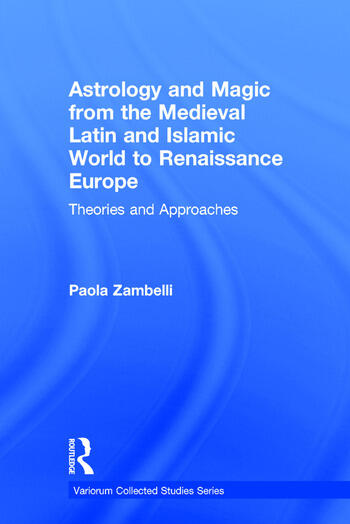 Astrology and Magic from the Medieval Latin and Islamic World to Renaissance Europe: Theories and Approaches

Astrology and Magic from the Medieval Latin and Islamic World to Renaissance Europe brings together ten of Paola Zambelli's papers on the subject, four of which are published in English for the first time. The papers in Part I of this volume deal with theories: the ideas of astrology and magic held by Renaissance thinkers; astrologers' ideas on universal history and its cycles; i.e. catastrophes and rebirths, theories; and myths regarding the spontaneous generation of man himself. Part II focuses on the role of astrologers in Renaissance society. As political counsellors, courtiers, and academics, their ideas were diffused and appreciated in both popular and high culture. Part III looks at the Great Conjunction of 1524 and on the long and extended debate surrounding it, which would not have been possible prior to Gutenberg, since astrologers printed numberless booklets (full of religious and political innuendo) predicting the catastrophe - flood, as well as earthquake or fire - foreseen for February 1524 (which, in the event, proved to be a month of extraordinary mild weather). Part IV reprints some review-articles of twentieth century scholars whose writing has contributed to our understanding of the historical problems concerning magic and other connected debates.

Contents: Preface; Part 1 Astrology and Magic as Theories: Theories on astrology and magic (1348-1586) in recent interpretations; Imagination and its power: desire and transitive or psychosomatic imagination; Pietro Pomponazzi's De immortalitate and his clandestine De incantionibus: Aristotelianism, eclecticism or libertinism? Part 2 Birth, Catastrophe, Cycles and Other Astrological Themes: 'Creating worlds and then laying them waste': the cyclical nature of history: notes on historians and on Giovanni Pico della Mirandola; 'The earth was like a sponge and men lived within it': ideas on spontaneous generation of man among Islamic and Latin thinkers. Part 3 Astrologers and Magicians in their Historical Role: Astrologers' theory of history; Many ends for the World: Luca Gaurico, instigator of the debate in Italy and Germany. Part 4 Methodological Notes: Alexandre Koyré and Lucien Lévy-Bruhl: from collective representations to paradigms of scientific thought; From Menocchio to Piero della Francesca: the work of Carlo Ginzburg; From the quaestiones to the essais: on the autonomy and methods of the history of philosophy; Bibliography of Zambelli's writings; Indexes.

Paola Zambelli is Professor of History of Philosophy at the University of Florence, Italy.