At the Interface of Transactional Analysis, Psychoanalysis, and Body Psychotherapy
Clinical and Theoretical Perspectives 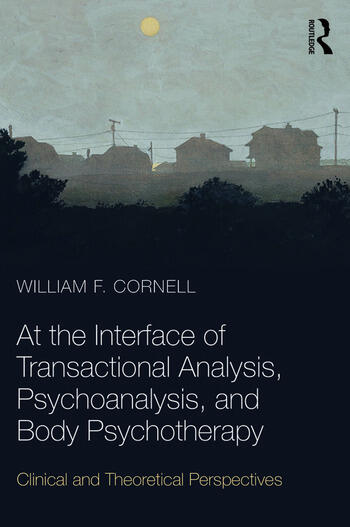 At the Interface of Transactional Analysis, Psychoanalysis, and Body Psychotherapy: Clinical and Theoretical Perspectives

William F. Cornell explores the work of psychotherapists and counsellors through the lenses of clinical theory, practice, supervision, and ethics. The reader is thus invited into a more vivid experience of being engaged and touched by this work’s often deep, and at times difficult, intimacy. The book is grounded in the approaches of contemporary transactional analysis and psychoanalysis, using detailed case discussions to convey the flesh of these professional, and yet all too human, working relationships. Attention is paid to the force and richness of the transferential and countertransferential tensions that pervade and enliven the therapeutic process. Unconscious processes are viewed as fundamentally creative and life-seeking, with the vital functions of fantasy, imagination, and play brought into the foreground.

In the era of short-term, cognitive-behavioural, solution-focused, and evidence-based models of counselling and psychotherapy, At the Interface of Transactional Analysis, Psychoanalysis, and Body Psychotherapy seeks to demonstrate the power and creativity of longer-term, dynamically oriented work.

Introduction: In Acknowledgement and Appreciation—Keeping Our Work Alive Section I: Deepening Our Capacities for Therapeutic Work Chapter 1) Opening to the Vitality of Unconscious Experience Chapter 2) Play at your own risk: Games, play, and intimacy Chapter 3) Fostering Freedom for Play, Imagination, and Uncertainty in Professional Learning Environments Chapter 4) The Intricate Intimacies of Psychotherapy and Questions of Self-Disclosure Chapter 5) Failing to Do the Job: When the Client Pays the Price for the Therapist’s Countertransference Chapter 6) Life Script: A Critical Review from a Developmental Perspective Chapter 7) Babies, Brains, and Bodies: Somatic Foundations of the Child Ego State Chapter 8) "My Body is Unhappy": Somatic Foundations of Script and Script Protocol Chapter 9) Aspiration or Adaptation?: An Unresolved Tension in Eric Berne’s Basic Beliefs Chapter 10) What Do You Say if You Don’t Say Unconscious?: Dilemmas Created for Transactional Analysis by Berne’s Shift Away from the Language of Unconscious Experience Chapter 11) Impasse and Intimacy: Applying Berne’s Concept of Script Protocol, coauthored with N.M. Landaiche, III Chapter 12) Nonconscious Processes and Self Development: Key Concepts from Eric Berne and Christopher Bollas, coauthored with N.M. Landaiche, III Chapter 13) The Old Stone House: Eric Berne’s Memories and Mourning for his Father’s Life and Death Section II: When Life Grows Dark Chapter 14) Grief, Mourning, and Meaning: In a Personal Voice Chapter 15) The Inevitability of Uncertainty, the Necessity of Doubt, and the Development of Trust Chapter 16) In Conflict and Community: A Century of Turbulence Working and Living in Groups

William F. Cornell maintains an independent private practice of psychotherapy and consultation in Pittsburgh, PA. He has devoted more than 40 years to the study and integration of transactional analysis, psychoanalysis, and somatic psychotherapy. He is a Training and Supervising Transactional Analyst and has established an international reputation for his teaching and consultation.

"William Cornell is among our most brilliant and creative contributors to the theory of psychotherapy integration and to clinical practice. In this new book, he provides a collection of essays that bring to bear a dazzling range of therapeutic and analytic schools of thought. He builds a richly imaginative yet critical integration, infused with his own deeply personal idiom, so that the reader is drawn into an intimate engagement with Cornell's mind. We see how these complex ideas and systems are filtered through one's own unique subjectivity and character and how they may be utilized to benefit the growth and healing of our patients."-Lewis Aron, Ph.D., Director, New York University Postdoctoral Program in Psychotherapy & Psychoanalysis, USA

"William Cornell claims Transactional Analysis as his "home team" and what a privilege it is to have him playing for us. He has long been a key TA theoretician and practitioner but also critic and challenger. His dual role has been, first to ensure that TA did not become parochial, to keep it lively, and secondly, to let people outside our community know that "TA is still very much alive".

This collection charts the process of how he has consistently challenged even the key tenets of TA theory such as ego states and script, both in terms of the inherent contradictions within TA, and by introducing TA to the broader context of modern psychoanalytic thinking, neuroscience and body work. This has been enriching for our own community and allowed people from other disciplines to begin to hear and appreciate TA in a language that is familiar to them. Cornell is not only a good communicator but also a superb translator.

However, I think it is in his accounts of his clinical work that Cornell gives of his best. He clearly enjoys his work and his deep love and respect for even the most challenging client is palpable. He never ceases to examine his own thinking and practice and is constantly seeking and learning. We are the fortunate recipients of this journey with his clients. Although many TA therapists may work differently from him they will, I think, readily identify with his commitment to what drew many of us to TA…Berne’s radical, egalitarian and practical view that people are ultimately in charge of their own process of change and have what it takes to make that change. It is up to us to find how we can be useful (or in Cornell’s terms) used in that process."-Diane Salters, ITAA President

In the complex, intense, sometimes murky world of the psychotherapy session, at moments when theory and training prove insufficient, Bill Cornell offers an alternate, powerful source of guidance, within the therapist’s own self. His new book connects his theoretical roots in transactional analysis, neo-Reichian body therapy, and psychoanalysis, with his evolving focus on the therapist’s use of one’s self as a source of understanding of the patient and an instrument of therapeutic change. The theoretical ideas are presented as they play out in the session; as his readers already know, Bill has the gift of story-telling. The case descriptions, including the many ways that impasses can occur, are transparent; the reader can see and feel into the room and inside of Bill himself. As in Freud’s stories of Anna O., Frau Emmy von N., Fraulein Elisabeth von R., and Dora, the reader can experience the worlds of Alessia, Kurt, Simone, Ben, Charlie and Abby, the tripartite interaction with Lara and Emily, and the painful failure in the treatment of Samantha. The stories also go beyond most case reports in incorporating the struggles of each participant in the treatment and the growth in each of them.

Bill’s stories and his explorations provide a rich source of ideas and observations, not only for clinicians but also for psychotherapy researchers who are seeking to understand the therapeutic process in new ways. In several papers, Bill finds and explores conceptual connections among the script theory of transactional analysis, the psychoanalytic ideas of Bollas , and the theory of multiple coding and the referential process. From my perspective, these connections help to build a new general theory of therapeutic change, incorporating subsymbolic bodily and emotional experience along with symbolic forms, and applicable across treatment types.

A major take-away for me from this collection of papers is the idea of a ‘vital base’ rather than a secure one, arising from Bill’s acute recognition of the difficulty for all of us – the person in the role of client, the person in the role of mental health professional, the citizens of our country and our world today – to accept the destructive forces, the feelings of hatred, terror, loss and shame that we share. Bill writes about the effects of these feelings, and the damage done by avoiding them, in the context of ideas concerning group psychology and social responsibility that emerged in the writings and work of Freud following WWI, and Berne in the 1960s. It seems necessary to think about these broader ideas and let ourselves confront such feelings as we struggle, in our varying roles and states, with the events of our times."-Wilma Bucci, Ph.D.