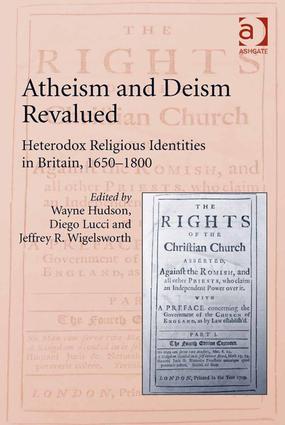 Given the central role played by religion in early-modern Britain, it is perhaps surprising that historians have not always paid close attention to the shifting and nuanced subtleties of terms used in religious controversies. In this collection particular attention is focussed upon two of the most contentious of these terms: ’atheism’ and ’deism’, terms that have shaped significant parts of the scholarship on the Enlightenment. This volume argues that in the seventeenth and eighteenth century atheism and deism involved fine distinctions that have not always been preserved by later scholars. The original deployment and usage of these terms were often more complicated than much of the historical scholarship suggests. Indeed, in much of the literature static definitions are often taken for granted, resulting in depictions of the past constructed upon anachronistic assumptions. Offering reassessments of the historical figures most associated with ’atheism’ and ’deism’ in early modern Britain, this collection opens the subject up for debate and shows how the new historiography of deism changes our understanding of heterodox religious identities in Britain from 1650 to 1800. It problematises the older view that individuals were atheist or deists in a straightforward sense and instead explores the plurality and flexibility of religious identities during this period. Drawing on the most recent scholarship, the volume enriches the debate about heterodoxy, offering new perspectives on a range of prominent figures and providing an overview of major changes in the field.

Wayne Hudson is Research Professor at the Public and Contextual Theology Strategic Research Centre at Charles Sturt University, Australia. He has also held academic positions at the Australian Centre for Christianity and Culture in Canberra, the University of Tasmania, Oxford, Utrecht, McGill University, and Griffith University. Specialising in European philosophy, politics and history, he has contributed widely to academic scholarship and is considered the leading authority on the philosopher Ernst Bloch. He won the Australian National Teaching Award for Arts and Humanities in 2004, and has published two books on English deism: The English Deists: Studies in Early Enlightenment (2009) and Enlightenment and Modernity The English Deists and Reform (2009). Diego Lucci is an Associate Professor of History and Philosophy at the American University in Bulgaria. His research mainly focuses on the philosophy of the Enlightenment and the history of Jewish-Gentile relations. He is the author of two books: Scripture and Deism: The Biblical Criticism of the Eighteenth-Century British Deists (2008), and The Jews, Instructions for Use: Four Eighteenth-Century Projects for the Emancipation of European Jews (with Paolo Bernardini, 2012). His articles have appeared in the Journal for Eighteenth-Century Studies, Hebraic Political Studies, and the Intellectual History Review. Jeffrey R. Wigelsworth teaches in the Department of Humanities and Social Sciences at Red Deer College, Canada. He is the author of Deism in Enlightenment England: Theology, Politics, and Newtonian Public Science (2009). In addition to this book, he has written articles on Anthony Collins, Thomas Chubb and Thomas Morgan, deists and Newtonianism, and to several examinations of John Toland. Outside of his work on deism are studies in the history of science and its public reception: Science and Technology in Medieval European Life (2006) and Selling Science in the Age of Newton: Advertising and the Commodification of Knowledge (2010).