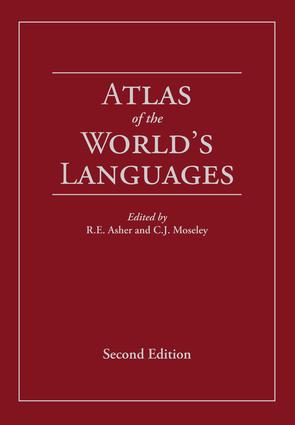 Atlas of the World's Languages

Before the first appearance of the Atlas of the World's Languages in 1993, all the world's languages had never been accurately and completely mapped. The Atlas depicts the location of every known living language, including languages on the point of extinction.

This fully revised edition of the Atlas offers:

Presenting contributions from international scholars, covering over 6,000 languages and containing over 150 full-colour maps, the Atlas of the World's Languages is the definitive reference resource for every linguistic and reference library.

Reviews of the second edition:

'This atlas is undoubtedly a valuable reference work for those interested in languages of the world. This updated and augmented edition is highly recommended for collection in major libraries, be they academic or public.' The Linguist List

"The new edition of this engaging and superbly organized atlas is intended to 'map as far as current knowledge allows the location of all living languages no matter how small the number of speakers'…The Atlas is highly recommended for academic and large public libraries as well as for libraries that havefound the first edition useful."-- Christine Whittington, Booklist

'This is a monumental production and provides a definitive analysis of the known languages of the world. The publishers, the editors and the authors of individual sections deserve the warmest congratulations on producing a scholarly work of reference of primary importance for anyone concerned with the study of contemporary languages.' - The Year in Reference

‘This atlas’s extraordinary attention to detail is astonishing’ - The Economist

‘Routledge’s monolithic new Atlas of the World’s Languages provides an unprecedented account of the linguistic composition of the world…So large a contribution is the atlas that I predict it will stimulate its own cottage industry of geographical linguistic research’ Mark Pagel, Nature