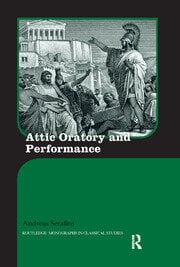 In a society where public speech was integral to the decision-making process, and where all affairs pertaining to the community were the subject of democratic debate, the communication between the speaker and his audience in the public forum, whether the law-court or the Assembly, cannot be separated from the notion of performance. Attic Oratory and Performance seeks to make modern Performance Studies productive for, and so make a significant contribution to, the understanding of Greek oratory.

Although quite a lot of ink has been spilt over the performance dimension of oratory, the focus of nearly all of the scholarship in this area has been relatively narrow, understanding performance as only encompassing 'delivery' – the use of gestures and vocal ploys – and the convergences and divergences between oratory and theatre. Serafim seeks to move beyond this relatively narrow focus to offer a holistic perspective on performance and oratory. Using examples from selected forensic speeches, in particular four interconnected speeches by Aeschines (2, 3) and Demosthenes (18, 19), he argues that oratorical performance encompassed subtle communication between the speaker and the audience beyond mere delivery, and that the surviving texts offer numerous glimpses of the performative dimension of these speeches, and their links to contemporary theatre.


What this book is about

Audience and speaker in the law-court

The notion of performance: conceptual groundwork

Performance in the theatre and the law-court

Other strategies to influence the audience

Reconsidering ekphrasis through the lens of ancient theory

The depiction of litigants, ēthopoiia

The performative dimension of oratorical portraiture

A note on the use of ancient sources

Addresses to the audience and civic community

The language of performance: imperatives and questions

Chapter 3. Aeschines and Demosthenes in the Theatre of Justice

Political thespians in the law-court

The use of quotations

"He is proud of his voice": oral excess in the law-court

"Drive him away and hiss him out": inviting the audience reaction

Inversion of tragedy into comedy

"Seraphim has revolutionized the way we read the Attic Orators. For so long works which were composed for oral delivery to a live audience have been read as written text. Seraphim changes all that not only by emphasizing aspects of oral performance such as the delivery or the gestures, but also by paying attention to the relationship between the speaker and his audience, the construction of the audience by the speaker, the cognitive and emotional relations which develop between the audience and the speaker, and the overall communicative effects of techniques such as the ethopoeia and ekphrasis. The holistic approach to the speeches of the Attic orators which Seraphim adopts brings these texts to life, and allows a modern audience to appreciate them in their full complexity."

"Particularly for the many students who will never read the stylistic analyses presented in the great warhorses of rhetorical scholarship, such as Goodwin’s commentary on Demosthenes 18 or a single page of Blass’s Attische Beredsamkeit, Serafim’s book should prove very helpful ... Serafim’s enthusiasm for rhetorical combat that mimics, or even quotes, theatrical works should encourage many students to look carefully at his target speeches."