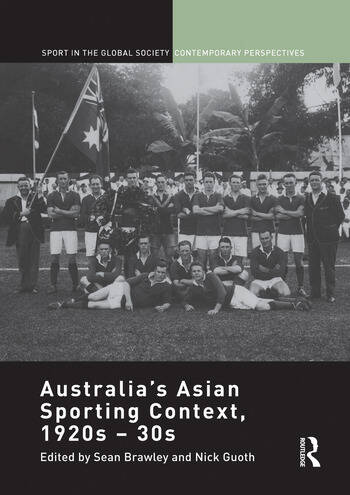 This book examines Australia’s sporting relationships with the Asian region during the interwar period. Until now, Australia’s sporting relationships with the Asian region have been neglected by scholars of Australian and Asian sports history, and the broader field of Australia’s Asian context. Concentrating on the period of the 1920s and 1930s – when sporting relationships between Australia and a number of Asian nations emerged in a variety of sports – this book demonstrates the depth of these previously under-examined connections. The book challenges, and complicates, the broader historiography of Australia’s Asian context – a historiography that has been strongly influenced by the White Australia Policy and the Pacific War. Why, for example, did white Australia so warmly welcome visiting Japanese sportsmen at a time when the Pacific region appeared to be inexorably sliding into a war that was informed by racial antagonisms?

This book was published as a special issue of Sport in Society.

Sean Brawley is Associate Professor of History and Associate Dean (Education) at the University of New South Wales, Australia. He is the author of eight books, including The Bondi Lifesaver: History of an Australian Icon; Fighting Words: Competing Voices of the Pacific War; and, most recently, Hollywood’s South Seas and the Pacific War: Searching for Dorothy Lamour.

Nick Guoth is a Visiting Fellow in the School of Sociology, College of Arts and Social Sciences at the Australian National University, Canberra.