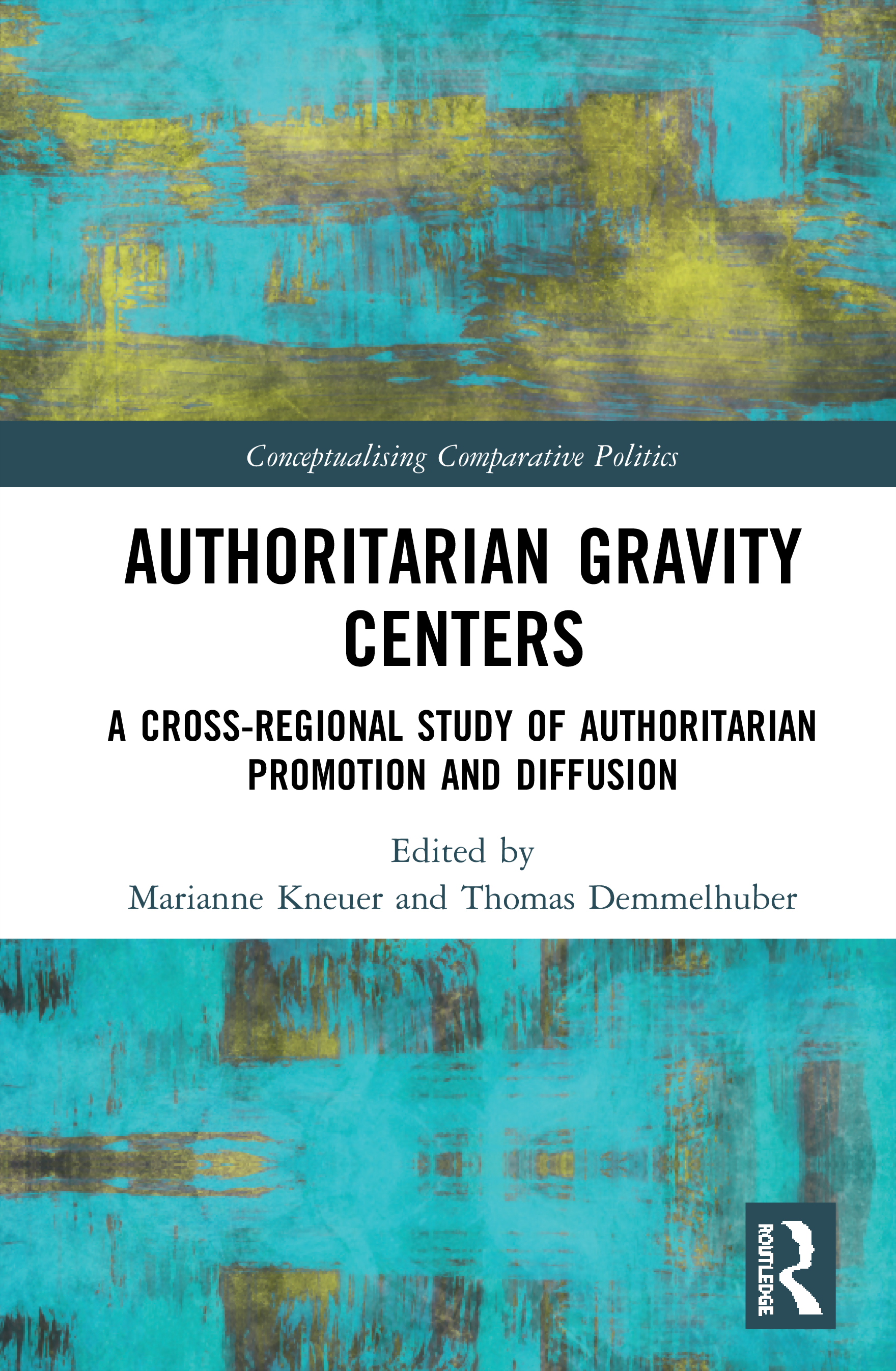 A Cross-Regional Study of Authoritarian Promotion and Diffusion, 1st Edition

Autocracies not only resist the global spread of democracy but are sources of autocratic influence and pressure. This book presents a conceptual model to understand, assess, and explain the promotion and diffusion of authoritarian elements.

Employing a cross-regional approach, leading experts empirically test the concept of Authoritarian Gravity Centers (AGC) defined as "regimes that constitute a force of attraction and contagion for countries in geopolitical proximity". With an analysis extending across Latin America, the Middle East, Eastern Europe, Central Asia and Asia, these AGCs are shown to be effective as active promoter (push) or as neutral source of attraction (pull). The authors contend that the influence of exogenous factors, along with international and regional contexts for the transformation of regime types, are vital to understand and analyze the transmission of autocratic institutional settings, ideas, norms, procedures and practices, thus explaining the regional clustering of autocracies. It is the regional context in which external actors can influence authoritarian processes most effectively.

is a vibrant and comprehensive contribution to the growing field of autocratization, which will be of great interest to undergraduate and postgraduate students of Comparative Area Studies, Illiberalism, International Politics and studies of democracy.

"What accounts for the recent spread of autocracy in the world? This important book develops a systematic conceptualization of the "attraction" exerted by powerful authoritarian regimes and demonstrates its analytical usefulness through well-chosen and thoroughly researched case studies. An interesting guide to understanding democracy's current predicament!" — Kurt Weyland, Mike Hogg Professor in Liberal Arts, University of Texas at Austin

"Based on painstaking research in different regions of the world, this thought-provoking set of studies provides new explanations for the regional clustering of autocracies." — Marlies Glassius, Professor of International Relations, University of Amsterdam

1. Introduction: A Comparative Perspective on Promotion and Diffusion of Authoritarianism

3. Kingdom of Gravity: Autocratic Promotion and Diffusion in Saudi Arabia

6. Russia’s Effects on a Consolidated Democracy: The Erosion of Democracy in Hungary and the Putin Model

7. Iran and its Neighbors: Military Assistance as Support for Authoritarianism

9. Spreading Cyber-Autocracy? The Shanghai Cooperation Organization and the Diffusion of Norms of “Internet Sovereignty”

Thomas Demmelhuber is Professor of Middle East Politics and Society at the Friedrich-Alexander-University of Erlangen-Nürnberg, Germany. Demmelhuber’s research focuses on state, power and politics in the Middle East from a comparative perspective including international actors such as the European Union.

Conceptualising Comparative Politics: People, Polities, and Markets seeks to bring a distinctive approach to comparative politics by rediscovering the discipline’s rich conceptual tradition and inter-disciplinary foundations. It aims to fill out the conceptual framework on which the rest of the subfield draws but to which books only sporadically contribute, and to complement theoretical and conceptual analysis by applying it to deeply explored case studies. The series publishes books that make serious inquiry into fundamental concepts in comparative politics (crisis, legitimacy, credibility, representation, institutions, civil society, reconciliation) through theoretically engaging and empirical deep analysis.