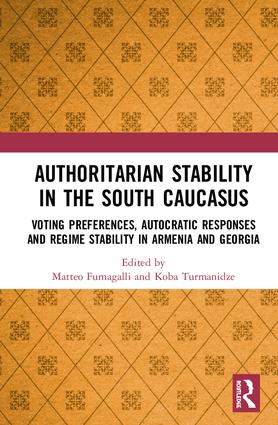 Authoritarian Stability in the South Caucasus

In recent years, competitive authoritarianism has become an increasingly common form of non-democratic politics. What is the relationship between the demand for particular public policies and a regime’s durability in office in such cases? How does policy-making interact with organizational power, the willingness to resort to coercion and patronage politics in countries home to democratic-looking institutions that none the less fall short of democratic standards?

In this book we show that such regimes do more than just survive and collapse. Moreover, we argue that far from being passive pawns in the hands of their leaders voters in competitive authoritarian regimes, do matter are taken seriously. We investigate how regimes and voters interact in the cases of Georgia and Armenia, two post-Soviet countries in the South Caucasus, to identify how voters preferences feed into policy-making and gauge the extent to which the regimes’ adjustment of their policies crucially affects regime stability. To these ends, we draw on a variety of quantitative and qualitative methods, including a survey experiment carried out in the two countries.

The volume was originally published as a special issue of the journal Caucasus Survey.

3. Elections and election fraud in Georgia and Armenia

4. Retrospective voting in Georgia: does the government’s past performance matter?

5. Promises, lies and the accountability trap. Evidence from a survey experiment in Armenia and Georgia

6. Balancing the three pillars of stability in Armenia and Georgia

Matteo Fumagalli is Senior Lecturer in International Relations at the University of St Andrews, UK

Koba Turmanidze is Director of the Caucasus Resource Research Centre in Tbilisi, Georgia