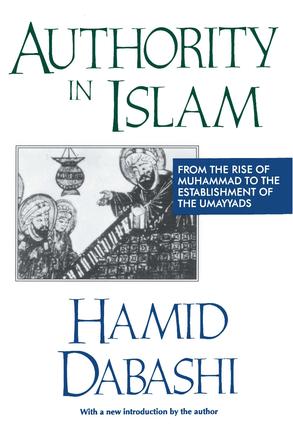 From the Rise of Muhammad to the Establishment of the Umayyads, 1st Edition

From the origins of Muhammad's prophetic movement through the development of Islam's principal branches to the establishment of the Umayyad dynasty, the concept of authority has been central to Islamic civilization. By examining the nature, organization, and transformation of authority over time, Dabashi conveys both continuities and disruptions inherent in the development of a new political culture. It is this process, he argues, that accounts for the fundamental patterns of authority in Islam that ultimately shaped, in dialectical interaction with external historical factors, the course of Islamic civilization.

The book begins by examining the principal characteristics of authority in pre-Islamic Arab society. Dabashi describes the imposition of the Muhammadan charismatic movement on pre-Islamic Arab culture, tracing the changes it introduced in the fabric of pre-Islamic Arabia. He examines the continuities and changes that followed, focusing on the concept of authority, and the formation of the Sunnite, Shiite, and Karajite branches of Islam as political expressions of deep cultural cleavages. For Dabashi, the formation of these branches was the inevitable outcome of the clash between pre-Islamic patterns of authority and those of the Muhammadan charismatic movement. In turn, they molded both the unity and the diversity of the emerging Islamic culture. Authority in Islam explains how this came to be.

Dabashi employs Weber's concept of charismatic authority in describing Muhammad and his mode of authority as both a model and a point of departure. His purpose is not to offer critical verification or opposition to interpretation of historical events, but to suggest a new approach to the existing literature. The book is an important contribution to political sociology as well as the study of Islamic culture and civilization. Sociologists, political scientists, and Middle Eastern specialists will find this analysis of particular value.