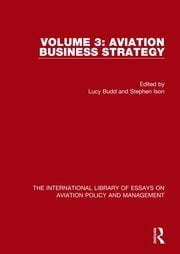 The world’s commercial aviation industry comprises a complex and highly diverse range of businesses with different forms of governance, ownership, management structure and organisational philosophies. The essays in this Volume address issues of market structure, focusing particularly on changes in the aviation industry that have resulted from policies of deregulation, as well as revenue, cost and pricing, airline mergers and acquisitions and the reasons for and characteristics of global airline alliances.

One of the most significant developments in aviation business strategy over the last four decades has been the emergence and expansion of low cost carriers and the implications that this business model has had for the sector in terms of competition, route offering, service innovation and profitability. Central to these discussions are issues of cost and the need to manage yields. This raises the issue of pricing, elasticity, and price discrimination, all of which are of relevance to passenger airlines, air cargo operators and airports.

Policies of air service deregulation and liberalisation have fundamentally changed the market structure of airlines and airports. As a result of new airlines entering the market place, many incumbent carriers sought to protect and grow their market share by reconfiguring their network into a hub and spoke operation and merging with, or acquiring their competitors. Another strategy airlines can use to increase their network presence, market power, and obtain enhanced economies of scale and scope is to enter into a strategic alliance with another carrier. Membership of an alliance enables a firm to access new markets that would previously have been difficult and/or expensive to operate into and help to overcome (at least in part) ownership restrictions, a lack of traffic rights to a particular country and markets with limited demand.

Deregulation and liberalisation have also changed the competitive nature of the airline market and led to a change in the ownership and control of airports and airlines with many moving from the public to the private sector. The increasingly competitive and contestable market, combined with commercial imperatives to generate a return on investment, means that airlines and airports are incentivised to grow their business through marketing and enhanced customer loyalty. Airlines helped to pioneer the development of customer loyalty schemes and the resulting frequent flyer programmes have become a standard aspect of many full service airline operators’ product offerings. However, increased competition and business model innovation have prompted a reconfiguration of these schemes with some low cost operators now incorporating elements of frequent flyer schemes.