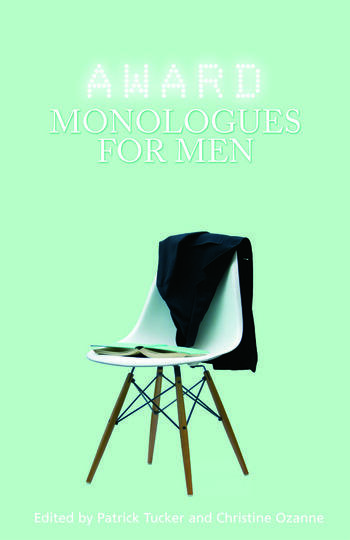 Award Monologues for Men is a collection of fifty monologues taken from plays written since 1980 that have been nominated for the Pullitzer Prize, the Tony and the Drama Desk Awards in New York, and The Evening Standard and Laurence Olivier Awards in London. The book provides an excellent range of up-to-date audition pieces, usefully arranged in age groups, and is supplemented with audition tips to improve your acting, and to ensure you give your best possible performance.

He trained as a physicist in the UK (B.Sc. London University) and as a theatre director in America (M.F.A. Boston University). Since his first professional production in 1968 he has directed more than 200 stage plays in all forms of theatre, from weekly repertory to the Royal Shakespeare Company, from the National Theatre in Seoul to the Bob Hope Memorial Theatre, S.M.U. Dallas. He started directing for the screen in 1978, and has directed more than 150 drama productions, from television soap opera to medical dramas to a feature film.

He has directed radio dramas for the BBC, and has taught the Kenyans and the Danes how to direct and act soap opera, and developed and taught courses on screen acting, screen directing, and on Shakespeare in London, all over the USA, and elsewhere in the world.

She graduated from RADA in 1958 with an Honours Diploma and three comedy prizes. Her professional career since then has covered repertory, touring and west end theatres, situation comedy, costume and modern dramas on television and film, plus over 50 commercials for television and cinema.

It was on the tour of Oliver! in 1965 that Christine and Patrick met and he has directed her in a number of plays and several TV dramas. Together they co-founded the Original Shakespeare Company and she was the Book-holder and Verse Nurse for most of their productions, and played Lady Capulet at the Jerash Festival in Jordan.

She has adjudicated Shakespeare Competitions for the English Speaking Union and the London Academy of Music and Dramatic Art’s Licentiate Examinations. She has taught Shakespeare Masterclasses in North Carolina, Sydney, Toronto and Vancouver and on a regular basis at LAMDA, for whom she helped prepare the First Folio Speeches for Men/ Women. Her previous book was The Actor’s Survival Handbook, co-written with Patrick Tucker, and published by Routledge.

'Patrick and Christine have researched, in depth, the latest modern plays of high calibre writing, many of which are extraordinary and, indeed, unfamiliar ... I highly recommend this book to anyone studying or auditioning, as the individual information and notes given for each speech are immensely helpful.' – David Suchet